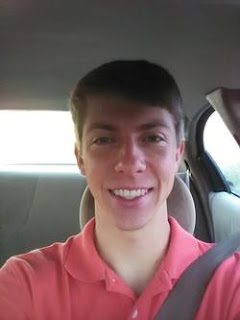 One such event- an accident on Highway 96, earlier this week offers a perfect example. Any time roads are closed, people want to know why. In this case, it was because of fatality accident.

The announcement that a fatality accident had occurred, even before the name of the victim had been released, was the most visited post this week on Inside Joplin.

The news that the victim was Jacob Holliday, 21, Jasper, (pictured) was released later that day and was the number four post for the week.

Jacob Holliday made many friends in his short time on this earth. He lived in Jasper, worked in Lamar, attended Crowder College in Webb City and had recently begun working in Joplin. His obituary was the most visited post this week on the Inside Joplin Obituaries blog.

It was news about a much different kind of person, President Donald Trump, that dominated the Turner Report statistics. The initial news that he will be coming to Springfield next week was the top post, while my commentary on Confederate statutes, based on the president's misadventures in reacting to Charlottesville, came in at number two and confirmation of his visit was number nine.

At number five was my commentary advising some of the most vehement of President Trump's supporters to lighten up.

The top posts and links to them are posted below:

1. President Trump coming to Springfield next week; Joplin breathes a sigh of relief

2. One brave teacher and the historically worthless monuments to Confederate generals

5. Lighten up- Some Trump supporters are beginning to whine as much as he does

6. Proposal for Joplin High School Band trip to Chicago to be presented to R-8 Board

4. Jasper man killed in collision with semi on 96

-Since November 2013, Inside Joplin Obituaries has published more than 5,600 free obituaries.

-For the past 14 years, the Turner Report has offered the Joplin area the type of investigative reporting, political coverage and commentary that cannot be found in other area news source. The Turner Report was the first to report on the background of former Joplin master developer Wallace Bajjali, problems with our judicial system, questionable campaign contributions for Judge Dean Dankelson, the financial situation and other questionable decisions of the Joplin R-8 School District and has continued to be the only news source that has reported extensively on how local governments mishandled funds and abused authority in the years since the Joplin Tornado.

Consider helping the Turner Report/Inside Joplin continue providing an alternative news source that puts the readers first by taking a subscription or making a contribution either by using the PayPal buttons below or by sending it to Randy Turner, 2306 E. 8th, Joplin MO 64801.

Thank you for your continued support.