Sports Talk Memories available in paperback, plus news about two of my other books 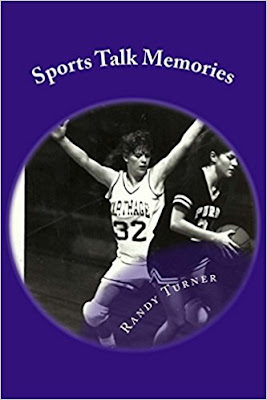 For the past several months, I have been juggling several book projects and have been keeping quiet about them because I was beginning to wonder if any of them were ever going to come to fruition.

After not publishing a new book since Silver Lining in a Funnel Cloud two years ago, I have published two paperbacks this week, as well as three e-books.

And I am expecting to have at least one more book and possibly two published by November (just in time for Christmas, of course)

Earlier this week, Classroom Confidential, my follow-up to Let Teachers Teach, was published. You can find the complete breakdown on that book at this link.

On Thursday, I published a collection of my sports writing, Sports Talk Memories, which up to this point has only been available as an e-book under the title Best of Sports Talk.

Both Classroom Confidential and Sports Talk Memories have also been published in e-book formats, with the Sports Talk book now including the new cover. The previous e-book has been discontinued.

In November, I will be publishing a book, currently untitled, featuring my memories of some of the fascinating people I have known over the years from the Newtonia, East Newton/Granby, Neosho area.

I am keeping the subjecdt of the other book I am working on under wraps for the time being.

Sports Talk Memories is a collection of features about some of the people I wrote about when I did the Sports Talk column in the 1980s and 1990s. Those columns provided a window into the people who played and coached the games, as well as the games themselves.

Some of the most interesting are revisited in the book, including the following:

2. A Bases-Loaded Walk- My tribute to the late Gary Shepherd, tells a story from my youth when the coach of my Little League team, Brad Letts, decided to walk the best player on the other team, his brother, Steve Letts, with the bases loaded. (Gary was the coach of Steve's team.)

3. She Will Always Be With Us- Webb City cheerleader Miranda Yocum (Joplin City Council member Miranda Lewis) talks about the death of her aunt, Nancy Cruzan, whose right-to-die case went all the way to the U. S. Supreme Court.

4. Stacey and the Magic Free Throw- The story of how a non-existent free throw enabled the Mt. Vernon girls team to beat Carthage in double overtime, despite the best efforts of Stacey Brunnert.

7. The Days of Swine and Roses- The day Jasper County Youth Fair princess (and pig-catching expert), Christy Olson got the munchies and lost a friend.

9. The Love of Baseball- My interviews with the former KOM minor league players at a reunion in Carthage as they played in an oldtimers game 50 years later.

10. Past His Bedtime- Today, he's head basketball coach at Parkview High School in Springfield, but in this story Landon Cornish was six years old and had no use for girls whatsoever.

11. Remembering Harry Caray- My thoughts after the death of the broadcasting legend

13. Smiles at the End of their Rainbows- The first graders whom he volunteered to help every day were the ones hit the hardest when Lamar swimmer Brandon Teel died suddenly from spinal meningitis.

14. Girls in the Big Gym- I wrote a column that put an end forever to having Carthage High School girls basketball games in the much smaller physical education building instead of the big gym.

15. Cruel Words- When she was in junior high, adults said Webb City volleyball and basketball player Kari Perry would never amount to anything. She tells the story of how she fought back with the help of her coach Sarah Wall.

16. Return of a Legend- Twenty-five years after leading Jasper to two straight undefeated football seasons, Bill McClintock returns to be inducted into the Hall of Fame.

17. The Game Ball- Lamar's Jim Hillman presents the game ball to his grandfather, Tom O'Sullivan, at the dedication of the stadium named after O'Sullivan.

18. Carthage's King Carl- The story of New York Giants great Carl Hubbell and how he struck out five future Hall-of-Famers in a row at the 1934 All-Star Game. (Hubbell was born near Carthage.)

19. First Kiss- When she was crowned Lamar High School Basketball Homecoming Queen, senior Leigh Hughes received her first kiss in front of 1,500 people. That was the hook Leigh's sister, Lindsay, used to get students to vote for Leigh. But there was another secret that no one knew at the time.

20. She Said Yes- The follow-up, two years later, to the previous story, as Leigh Hughes' boyfriend offers a surprise wedding proposal, and once again it was in front of 1,500 people.

24. Love and Haiti- While her Lamar teammates were playing in a brand new gym at the Aurora Tournament, Kelly Stahl was teaching Haitian children how to play on a dirt court.

25. Beating the Odds- A Liberal barber survives brain surgery and holds off death for a few days to accept a special award for years of supporting the school's athletic teams.

26. Taking the Wrong Path- Carthage junior varsity basketball player Alicia Peters was great with the steals, but did not always take the ball in the right direction.

27. My Little Brother's Face- Lockwood High School reacts to the suicide of a freshman football player.

29. Smelling the Silver- He played in one of the highest-scoring Cotton Bowl games in history, but more than four decades later, it is still the Silver Tiger game between Lamar and Nevada that ranks first in Pete Ihm's memory.

30. My Comeback- A first person account of my return to baseball, playing in the Granby Old Mining Town Days Oldtimers Game.

31. Family and Friends- When his house burned down, Lamar guard Michael Miller learned what was important.

32. A Shining Star- On the day when everyone thought she would be headed to the state volleyball championship, funeral services were held for Diamond senior Kelli Dorsey.

33. A New Home- After spending all of her life in the small town of Henderson, Nebraska, Andrea Friesen moves to the big city (Carthage) for her senior year.

34. The Power of Prayer- After an ACLU protest, the pre-game prayer over the loudspeaker at Lamar football games was stopped, but more than 100 people gathered in the end zone to pray.

35. Second Chance- He nearly died when a trash dumpster fell on him, but only a few years later, Carthage wide receiver Shaine Sundy received a scholarship to play football at MSSC.

Links to the paperback and e-book versions of Sports Talk Memories are featured below:

No professional wrestling? And you call this a sports book! For shame, Randy!