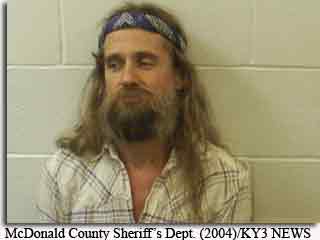 For a second time, U. S. District Court Judge Douglas Harpool has rejected a request from McDonald County white supremacist Robert Joos for an early release from his supervised probation.

In his August 14 motion Joos, representing himself, said he had "29 months of clean conduct" since his release from prison after serving six years on a weapons charge.

Joos probably did not do himself any favors by continuing to insist that the original charges against him were trumped up and that his sentence was "ridiculously long."

As he did in his first motion for an early release, Joos said he needed the freedom to help track down the people who had been vandalizing and stealing things from his church. The stipulations of his probation kept him from crossing the state line into Arkansas. "I can't follow them to their hideout and report them to the cops," Joos wrote.

In the earlier motion, Joos said he wanted to help the Joplin FBI office because it was too busy dealing with all of the meth in the area.

Joos was arrested in 2009 as part of an FBI investigation into a 2004 racially motivated bombing in Scottsdale, Arizona, which also resulted in the arrests of national white supremacist leaders, the Mahon brothers, Dennis and Daniel.

Joos himself told undercover agents who visited his property of the importance of having firearms "in several locations" and said he used 18 caves to hide weapons, according to the affidavit.
Posted by Randy at 9:06 PM