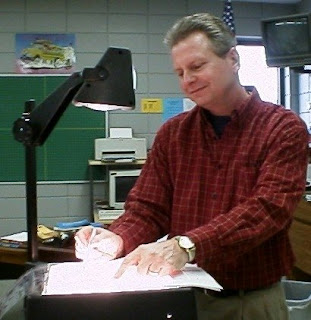 It was my second week of teaching during the 1999-2000 school year and I was having a terrible day.

My fourth hour creative language arts class, an unruly collection of Diamond Middle School seventh and eighth graders, was out of control and I did not know what to do.

As soon as I would handle one outbreak, another had begun and so it went for the entire 50 minutes.

Until the previous week, I had not been in charge of a classroom since I did my student teaching 18 years earlier.

I was teaching in a trailer between the middle school and the high school, a circumstance that made me feel even more isolated than first-year teachers normally do.

My principal, Ron Mitchell, suggested that I talk to the sixth and seventh grade math teacher, a veteran teacher with a reputation for maintaining classroom discipline.

"I don't know what to do with these kids," I told the teacher.

Larry Augustine offered me some sage advice. "If they act up tomorrow, pick a couple of them and send them down to the office. That will get your message across."

When fourth hour arrived the next day, I followed Mr. Augustine's advice. About three minutes into the classroom, a seventh grader who was seated close to the trailer door was acting silly, making it hard for me to conduct the class, so I turned to him and said, "Anthony, you're out of here. Go to the office."

Anthony looked at me in disbelief. "I'll be quiet," he said.

He still could not believe I was kicking him out of class, but he finally made his way to the door and walked across the parking lot to the principal's office.

The remainder of the class went smoothly. After school, Mr. Augustine asked, "How did it go today?"

"I followed your advice." I told him what I had done.

"You kicked out Anthony?"

A big smile crossed his face and he said, "I have another piece of advice for you- Be careful about kicking out a board member's son."

As it turned out, Anthony was one of my best students that year and the next and his father told me to kick him out whenever he got out of line, which he never did again.

I learned a lot that year and the next two from Larry Augustine.

I watched him teach occasionally during my planning periods to learn the secret to his teaching success. He had served in the military and been a first class pitcher on both collegiate and semi-pro baseball teams, but his manner was as casual as any teacher I ever saw. He conducted his classes as a conversation, not a lecture and even the students who hated math looked forward to entering his classroom each day.

The students were never able to pull anything over on him, which fascinated me because they were running circles around me during those early days.

Teaching in a trailer was not easy. I always had several students who were late to class because of the distance they had to walk from the regular middle school to my classroom. I told Mr. Augustine that it was making it difficult for me to teach because I had a hard time getting the class started on time. "If they have to get a drink of water or go to the bathroom, they're going to be late," I told him.

"They told you that?"

I was already beginning to catch on that I was missing something.

"I want you to try something," he said. "After your next class, go to the elementary school bathroom and then get back to class. You won't be too late getting back."

So I did. I went past the middle school and into the elementary section during the next passing time, went into the bathroom, did what I needed to do, and then walked back to the classroom. Mr. Augustine was smiling as I passed his room.

I did. I walked into my classroom with a full 45 seconds left before the bell rang. The students learned quickly the excuses were not going to cut it any more. They had to be in class on time or they would be counted tardy.

I spoke to Mr. Augustine after school that day, "They aren't able to pull any of that stuff on you, are they?"

"No, they know better than to pull any of that nonsense on me ... because the students I had when I first started teaching did everything they're doing to you and more. You learn from your mistakes and I made quite a few.

For those first three years of being in the classroom, I was fortunate to have the opportunity to work with Mr. Augustine, assisting him with the academic team. He retired at the conclusion of that third year and began another successful career as a real estate agent.

I ran into him a time or two over the years, but had not seen him recently.

Earlier this week, I learned he had died at age 61, one day before his 62nd birthday, after fighting a fast-moving inoperable cancer.

To the end, he never let the cancer defeat him, As he underwent radiation treatment, he and his wife shared their cancer journey, using the trials they were going through to help others.

As I watched a Neosho First Baptist Church video featuring Larry Augustine and his wife, Tina, giving their testimony, I remembered the year he coached a talented team that won the traveling Academic Challenge, wresting it from favored Carl Junction..

During the middle of that year, he was hospitalized with appendicitis and I had to coach the team during a science competition in Lamar. It was the only leg of the Academic Challenge Diamond lost that year.

When he returned, I apologized for letting him down.

He shrugged it off.

Even at the end, Mr. Augustine maintained that positive attitude. He was a man who served his country with the U. S. Navy, with his duties including aiding in the evacuation of Vietnam. He was a man who inspired thousands of students during his teaching career, and continued to inspire by teaching others how to live even as he was dying.

It was all part of the plan...and no one ever followed it any better.

(In the top video from 2015, Larry Augustine and his daughter put on a show during a special wedding reception dance. In the bottom video, Larry and Tina Augustine share their testimony.

I only had the pleasure of meeting Larry in the past couple of years, but he was one of the truest Christian gentlemen I have ever met. I never asked about his faith, but it flowed from him in waves. He was kind and had a heart for serving others, but that should not be mistaken for weakness. We could all learn much from his legacy - kindness and strength with his Christian faith made him an example for all. Much love and prayers to his family.

Mr. Augustine was a good teacher. Too bad you never improved from your days in the trailer.

I had the pleasure of knowing him as my teacher in diamond. I absolutely hated math class but really enjoyed going to his class. He made it his job to help as many students as he could no matter what tge problem was he was always there to help