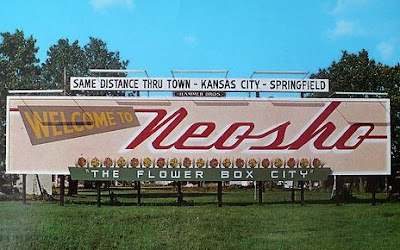 Sometimes I receive comments that are rejected because they are filled with obscenities, but the comments still make me do a bit of reflecting.

One such comment came this week from someone from Neosho who was upset with me because all i do "is write about all of the bad stuff about Neosho. You never write about any of the good things that are happening in our community.

Accusing me of doing that to Neosho reminded me of something that happened almost 40 years ago on a Saturday night on the Neosho Square.

A group of us were on the west side of the square when Scott Harris, who was his late teens at the time, had to go to the bathroom. He and another friend walked down an alley to go behind a store and urinate. A few moments later, the rest of us had cause for concern when a Neosho Police Department cruiser pulled off the square and drove down the same alleyway.

A few moments later, the other friend emerged from the alley, but not Scott. We asked him what happened.

Apparently, the friend had already finished what he was doing, but Scott was caught right in the middle of relieving himself behind the store building.

The friend said the police asked Scott where he was from. Scott replied, "Stark City."

The policeman asked, "Do they teach you to do that in Stark City?"

"No, we always try to hold it until we get to Neosho."

How he kept from being arrested I will never know.

Back to the present, the commenter's complaint is one I have heard hundreds of times over the years, all through my times as a newspaper reporter and editor through the 14 years of the Turner Report.

Why do you only write about the bad things and never the good things.

While that characterization is not totally true, there is enough truth to it that I felt I should write about it.

For the most part, I do the investigative reports and the digging into crime and court cases because if I don't do it, it may not get done.

With the notable exception of Jordan Aubey at KOAM, the traditional kind of investigative reporting is just not done any more. It takes time,  it takes patience and it takes a willingness to keep going even when you are threatened (and occasionally punched).

Investigative reporting is something I have been doing for the past four decades, so I have heard the complaint more than a few times.

I can understand the complaint. We all would rather hear good things about how our taxpayer money is being used.

When it is not the case and I have sources and documents that confirm that, I am going to run with it and let the other area media deal with whatever stories are coming down the PR pipeline.

This week, Neosho posts make up four of the top 10 Turner Report posts, but the top post once again, as it has usually been since the beginning of December, is connected to the murder of three-year-old Jayda Kyle of Carl Junction.

For those of you who have not yet subscribed or made a contribution to the Turner Report/Inside Joplin, I hope that you consider doing so at the PayPal buttons below the links or by sending your subscription money or contribution to Randy Turner, 2306 E. 8th, Apt. G, Joplin, MO 64801.

Help me continue to provide an alternative news source, commentary, and investigative reporting for Joplin and the surrounding area.

2. Neosho mayor attacks liberals, modern culture and people who would ban AR-15, but not Girl Scout cookies and pitchforks

9. My thoughts on guns and those who fight for the right to own AR-15s

3. Citizen phone call leads JPD to recovery of stolen vehicle, confiscation of meth and woman with marijuana in her bra

If your kid got caught stealing, and the store called you to let you know, would you blame the store for being negative, defending your child no matter what?

If that's your attitude, you are telling the kid that it's okay to steal, that the problem is with the store. Do you think the kid will stop stealing?

People generally have no problem taking the side of reporting when it is about people with no influence. For instance, many people got upset when the city manager in Joplin recently suggested that the police department take a more neutral tone with regards to incident reports. Everyone got up in arms. "Not reporting crime doesn't mean it's not happening." "Why should we take the feelings of alleged criminals into consideration?" etc.

Look how different people's attitudes are when it's someone of influence. Now we're "pissing on the community" when things are reported about Neosho administration's attempts to hide their financial misdeeds. That doctor who allegedly had sex with the teenager is in fact "such a nice man" and how dare we ruin his reputation.

Local police departments and news agencies seem to follow that line of thinking. They don't tend to put out incident reports on people of influence, advertisers, etc., unless they have some political interest in doing so (like The Globe when they were going after Rosenberg).

Here's the thing. While I agree that the news should be fairly neutral in tone, except when editorializing (which is different than reporting), there are no true secrets under the sun. You should consider that there is a distinct possibility that anything you do could potentially come to light in some form at some point. If you are not willing to accept the possibility and consequences of that, don't do it.

I have never seen anything on Turner's blog that didn't appear to have some substance to it as a news story, otherwise he wouldn't report it in the first place, and I absolutely believe that he would own it if he made an error. He has always been the first to draw attention to his faults, because it takes the wind out of the sails of anyone who might want to criticize him (and there are plenty who want to).

10:36 is right on. Unfortunate that Turner is caught in an area of the country where they tend to protect the "good republicans" and vilify the bad "socialist who want too much money for people, good health care and a clean environment".
I would also like to see another blog start up that pays as much attention to the academic accomplishments of our area students as they do to, sometimes up to 4 pages a day, to sport activities. My daughter did extremely well in school and except for when she got to go to the Scholars Academy and made the scholar list in Joplin there was little or no reporting on the efforts of band members, debate teams, math teams and other academic pursuits by students. Sports demand a lot of time, but no one thinks about the commitment and time spent learning to play musical items or studying long hours preparing for debates. Oh, how come bands and debate teams usually have to earn their own money to travel supporting their school while sports get free rides. Let us not mention music and debate teams buy their own instruments, suits, computers and other necessities to perform for their school while uniforms are furnished. Part of the blame rests on papers and much blame rests on the schools and teachers for not advertising their academic students accomplishments. Hooray for Nerds who excel in science and academics getting good paying jobs without injuries or large crowds cheering them on.

I would love to contribute to your cause but I'm on the chopping block in Neosho. Your Stark City story made me laugh hard.

I have read your blog for years and think you do a great job. Thank you for all the hard work you do in spite of all the harsh criticism. Many times I have considered contributing money, but two things hold me back. That is your frequent, obvious bias and snarky comments. I support your right to express your opinion. No problem. Just don't include it as part of the news item.

When I read/listen to news, from any reporter, I just want the facts. When they inject their opinion, while reporting news, I feel it disingenuous. I feel they have taken advantage of public trust. They lose credibility. While I don't agree with Trump calling anything he doesn't like "fake news", I can see why some latch onto that term. It's the distrust of the media and their frequent obvious bias. I enjoy reading/hearing editorials and commentaries, when they are billed as such.

So that's my two cents. I'm sorry, but that's all I can give as things stand now.

Stop it. I am a republican a d am still a fan pf Randy's blog.
I enjoy the real news regardless if it is about Republicans or Democrats.

Bottom line, we all eat, sleep and breathe the same air.

732- I know what you are saying, my kid went to a national event and we paid a large portion of it. But don't be discouraged, sounds like your child will be laughing after the glory days end.

The true urination on Neosho is the number of young people who leave, become educated and never come back. There is a reason for that.