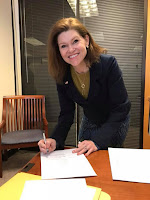 (From the Renee Hoagenson campaign)

Renee Hoagenson has created three new business from scratch in Missouri's 4th Congressional District, today she started on a new venture, filing as a candidate for Congress.

"I know what it takes to start with nothing, and make it into something successful," said Hoagenson. "The people of our area do not have a voice in Washington DC who understands that if we continue to do what we've always done, we're going to get more of what we've got - and that's not good enough."

"The people are starting two steps back because the politicians in Washington are not independent thinkers. They are beholden to their corporate PAC contributions and special interest supporters," said Hoagenson. "My campaign does not, and will never, take donations, or even phone calls, from the Koch Brothers. We haven't taken even one corporate PAC check. Instead, we have over 1500 individual supporters. Not corporations, real human beings."

"I am dedicated to rebuilding the foundations for a strong middle class in rural Missouri," said Hoagenson. "We must ensure that every person working a full-time job is paid a wage that can support their family without needing government assistance. This allows families to be families again and parents to spend time with and teach their children values and how to become good citizens. At the same time, we must get small businesses the resources they need so they are healthy enough to pay good wages and to grow."

Hoagenson, a Democrat, is a Missouri native, living in Warrensburg as a child, and now in Columbia, where she has raised her three children.

An entrepreneur, Hoagenson recently sold her third start-up so she can campaign full-time in the 24 counties that make up Missouri's 4th Congressional District.
Posted by Randy at 4:19 PM