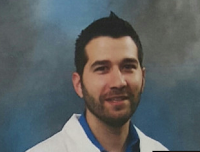 A Tuesday, August 21 trial date has been scheduled in Jasper County Circuit Court for a Joplin doctor charged with felony statutory rape and statutory sodomy.

The affidavit alleges the abuse grew even worse. relating incidents in which Goins had both oral sex and intercourse with the girl.

The trial is expected to last four days. Judge Dean Dankelson will preside.
Posted by Randy at 11:08 AM

He should be locked up for a long time. What a perv.

He looks real cute with his little flip hairdo. He'll learn alot in prison about what they think of child molesters. What a scumbag.

Innocent until proven guilty! If he gave the proper campaign contributions, he'll get off. Just ask the Jordans.

I understand what you're saying. We can hope and pray justice will be served.

Joplin, what the hell?! Our area is beyond repair and it's happening at all levels. Is there anything still good here?

Just another day in Joplin.

As somebody who knows Dr. Goins well, I wish to all of the previous commenters that they are never tried in a public forum. Having worked beside Dr. Goins and who is entrusted with a stranger's life, I have significant doubts regarding these allegations. I also have concerns with journalists who sensationalize stories to garner readership. However, I will echo the sentiment on this forum that I hope that justice is served.

Ok,I am so glad that this incredibly horrible thing is finally going to be tried in court....I do not understand why this person is still being allowed to, " practice ", medicine, with the public, adults, women, children, men, even though it is public fact that he is, or has been, an internet pornographer, and maybe, other child abuse instances,, while he is out, free on bail.. I get innocent, till proven guilty, if you have enough money, but this is something where this person might hurt other innocents. And, I believe, a case where although, " indicted ", the case has been postponed far to long, probably with the hope that some one might be paid off...Think about it, and thanks for the blog.

Hmmm...I have no doubts whatsoever...unfortunately...This young girl will suffer all of her life because of this horrible, abuse, of an adopted daughter. He has serious, some say irreversible, mental issues.

Having been a patient of Dr goins I find these charges very hard to believe.