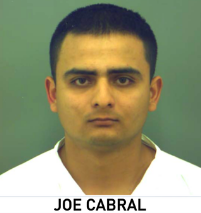 A $1 million bond has been set for Joe Cabral, 20, an infantrymen with the Second Brigade Combat team, who is charged with murder in connection with the February 23 shooting of Pfc. Zachary S. McGuire, 21, whose address was listed as Webb City in news accounts.

The two men were stationed at Fort Bliss in El Paso, Texas, and were roommates, according to KFOX.

An argument led to the shooting, the police said.