Probable cause- Carterville man, upset with his bill, threatens to shoot city water clerk in the head 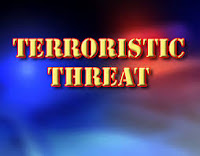 A Carterville man faces a felony charge of making a terroristic threat after allegedly threatening to shoot the city's water clerk in the head.

Franklin Ray Kroush, 66, is not in custody at this time.

Kroush allegedly made the threat while in Joplin talking to a social worker, according to the probable cause statement. He had received a shutoff notice because he had not paid his bill and social worker called Carterville City Hall to see what the situation was.


During the conversation, the city's water clerk could hear an angry Kroush in the background and he apparently was not satisfied with how the conversation concluded, according to the statement:


When the social worker got off the phone and Kroush left, the social worker's building was put on lockdown due to fears that he might return with a gun since she had been unable to help him with his problem.

The social worker called 911 and then called Carterville City Hall, which was placed on heightened alert and an officer was placed on duty there the remainder of the day.
Posted by Randy at 6:04 PM

Question: Why did you not redact the name of the social worker making the report? Would that not create a potential safety risk for her by identifying her by name?

I did not realize until I received your comment that I had failed to remove her name the first time it was used. I had removed every other mention of her name and the Carterville water clerk's name, but I should have checked through it one more time before it was published.