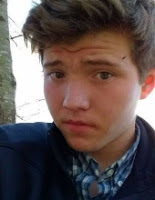 The tragic deaths of three people whose best days were ahead of them drew the interest of readers of the Turner Report and Inside Joplin Obituaries blogs.

Thirteen-year-old Carl Junction Junior High School student John Wheeler (pictured) drowned in a flash flooding incident in Joplin. His obituary was the most visited post on Inside Joplin Obituaries.

The five most visited posts on the Turner Report all involved the deaths of young people.

Four of the posts involve the death of Joplin High School sophomore football player Kadin-Roberts Day this week during practice.


The most visited post this week actually comes from September 7, 2017, when I wrote a personal post about the death 40 years earlier of 20-year-old Missouri Southern student and East Newton High School graduate Barbara McNeely.

While the decision to put everything into a barebones one-man news operation and make news and writing books my occupation was not an easy one, thanks to you it continues to become more successful.

I appreciate the small percentage of you who have been contributing financially, through subscriptions or donations. I do not have paywalls and I do not charge for obituaries, which are two methods often used by news organizations.

If you have not contributed recently and feel that the posts on the Turner Report, Inside Joplin and Inside Joplin Obituaries are worth supporting, please use the PayPal button below or send your contribution of any amount to Randy Turner, 2306 E. 8th, Apt. A, Joplin MO 64801.

I plan to continue doing this, but some support is greatly appreciated and I do not take it for granted.

This week's most visited post and links to each of them can be found below the PayPal buttons.

1. Forty years have passed since the murder of Barbara McNeely

9. Lanagan bank employee who embezzled $94,000 and went on gambling spreee sentenced to one year, one day in prison

1. Lamar man crashes into tree while running from the law at 104 miles per hour, passenger seriously injured

3. Three killed, two others in critical condition following crash on I-44 in Joplin

4. Names of victims in triple-fatality crash released, all three from same family