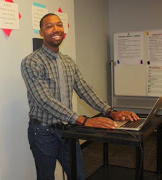 In a 5-0 vote with one abstention during a closed session Tuesday, the Joplin R-8 Board of Education voted to part ways with Joplin High School business teacher/coach Terrence Scott.

Scott was reportedly removed from the high school shortly after the 2019-2020 school year began.

Board minutes show the vote was to approve a "separation agreement," with board member Lori Musser making the motion to approve it, Michael Joseph seconding the motion and those two, along with Sharrock Dermott, Derek Gander and Debbie Fort voted in favor of the motion with Brent Jordan abstaining.


Scott was beginning his third year at the high school after teaching one year at North Middle School.
He was an assistant coach with the freshman football team had been scheduled to be head coach for seventh grade boys basketball.

During the closed session, the board also discussed legal actions and made the following personnel moves:

So uh what happened? Why was he removed?