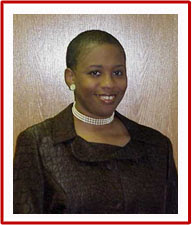 If you want to see if you agree with Governor Matt Blunt's appointment today of Angeletta McCormick Franks as director of the Office of Supplier and Workplace Diversity, feel free to check out her resume, which she has kindly posted online.
The resume, posted April 7 with campaignjobs.com indicates Ms. Franks:

-Has a clear understanding of what "is" is
-Has never considered voting for Bill Clinton
-Has six years of experience working in political campaigns
-Served as a strategic relationship builder to key constituents, special interest groups and multicultural organizations for U. S. Senator Jim Talent
-Managed the research initiatives, purchase and implementation of the Diebold Election System, a new 2.2 million dollar electronic voting system, which provides accessibility and empowerment to the widest populations of voting disciplines for the City of St. Louis.

In the areas where she has to agree or disagree with a number of statements about her political philosophy, Ms. Franks says she:

-Has no opinion on abortion, gays in the military, or gun ownership
-Believes increases in the minimum wage add to unemployment
-Does not agree that soft money contributions by individuals, corporations, and unions should be banned
-
Posted by Randy at 1:21 PM