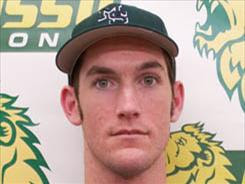 The death of Missouri Southern State University pitcher Danny Sickles, 20, who had been suffering from flu-like symptoms, shocked friends and family at his home in Orlando, Fla., according to an article posted a couple of hours ago on the Orlando Sentinel website:

Family and friends learned the news late Saturday night and early Sunday morning. "If I could say anything to him," said Jason Sickles, one of Danny's two younger brothers, "I'd say, 'I love you and I miss you.' "

George Kirchgassner, Freedom High's baseball coach, had spoken to Danny on Thursday and on Friday, to see if Missouri Southern had a roster spot available for a former player who wanted to transfer to the school.

"He was always looking out for other people," Kirchgassner said. "Danny was an All-American kid: a good athlete, very intelligent, a tremendous sense of humor. Just fun to be around. He'd just make you laugh. He was just full of a life, just a great, great kid."

Kirchgassner always marveled at how smart Sickles was. He recalled how Danny often computed teammates' earned-run averages in his head right there on the diamond during practices.

He was a good pitcher, too. At 6 feet 3 inches, Danny had a fastball that could overpower hitters and a sharp curveball that often dropped straight down as it crossed the plate.

He came from a family of baseball lovers. His mom, Stacey Sickles, learned about the sport from his dad, Brian Sickles, who grew up playing ball on Long Island, N.Y. Brian and Stacey have two other children who, like Danny, are also right-handed pitchers: Jason, a 17-year-old junior at Freedom, and Alex, a 13-year-old eighth-grader at Hunter's Creek Middle School.

Danny was a lifelong New York Yankees fan who wanted to play for a major-league team.

He and his closest friends --- a group that included former Freedom High players Danny Rivera and Adam Whitlow --- shared that dream. Just before New Year's, the three of them met at Orlando's Osprey Park to throw a baseball in preparation for their 2008 seasons.

"When I went home for break, I didn't know it was the last time I was going to see him," said Rivera, an outfielder at Frederick Community College in Frederick, Md. "I didn't get to say a decent goodbye."