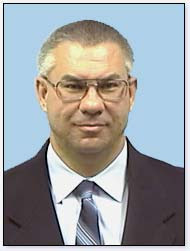 Fort Smith City Administrator Randy Reed is after former Joplin Police Chief Kevin Lindsey's scalp, but Lindsey has some powerful supporters in his corner.
The Fort Smith Fraternal Order of Police is backing Lindsey, who has been police chief at Fort Smith since January 2007:

The local Fraternal Order of Police also declared no confidence in City Administrator Randy Reed, who placed Lindsey on administrative leave on Friday. Reed said Friday he planned to recommend that Lindsey be fired.

Lindsey had been on the job for eight months when he placed 2 of his top officers, Major Jeff Barrows and Captain Steve Howard, on paid leave pending an internal investigation. Barrows was eventually fired and Howard was suspended for 30 days.

On Friday, Reed said Lindsey didn't communicate with him on major department concerns and initiatives. For example, Reed said he learned of Lindsey's decision to suspend high-ranking officers from sources outside the department rather than from Lindsey himself.

Reed said the city board will go into executive session on Tuesday night to talk about Lindsey's future.