KODE reporter says he is for Huckabee 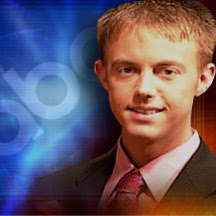 KODE reporter Dustin Lattimer revealed his preference for president during an interview with Pittsburg State University's student newspaper, The Collegio. The article begins:

Dustin Lattimer prides himself on being a conservative Republican and a strong Christian. His choice for the 2008 presidential election, Mike Huckabee, shares these views and according to Lattimer, is just what this country needs.
"I, myself, am a Christian and believe that our nation's leader needs to represent that religion's beliefs and morals," said Lattimer, a junior in communication. "Huckabee is the strongest Christian, from what I've observed, and would make a great leader from a Christian's perspective."

Lattimer explained that Huckabee, who is a former governor of Arkansas, was a preacher before becoming governor. Because of Huckabee's beliefs, Lattimer said, his followers include Christian evangelicals, conservatives and pro-life advocates.

The article about Lattimer, who is also a PSU student, continues:

Lattimer says that although Huckabee's religious views are important, they aren't the only reason that the candidate remains his No. 1 choice.
"There are several issues that make me believe Huckabee is the right man for the job," Lattimer said. "I'm a strong conservative Republican. It's well known that Huckabee is the most conservative candidate on the campaign trail."

Another important issue, Lattimer says, is Huckabee's conservative spending. During his time as governor, Huckabee pushed big tax cuts for residents of his state and enacted a $90 million tax relief package for Arkansas families, Lattimer said.

"I vote not just on the issues that portray my political views, but because of what the conservative candidate believes in and represents," Lattimer said.
Posted by Randy at 8:44 PM

I was thinking reporters were supposed to be unbiased?

That's what happens when you let Lattimer on the Loose.

This is really no big surprise when the station's new News Director is, himself, Emcee at the annual Republican Lincoln Days event. Can KSN or KODE really be trusted to bring unbiased news to the four state area? I think not!

Dustin Lattimer is a part time KODE employee and full time college kid who didn't think that giving a quote to his college newspaper would land him in the Turner Report. Give the kid a break, he's just trying to find his way in the world.

Make it a learning lesson, Dustin. Especially if you want to be Full Time outside of the buckle in the belt.