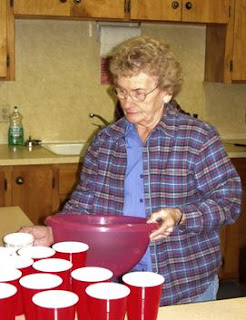 Mom has hit the big time.

In 2007, JoAnn Turner was named “Citizen of the Year,” in Newtonia.

It was a good choice.

JoAnn Turner has lived in Newtonia for most of her married life—and that’s 55 years.
In those 50 or more years, JoAnn has seen many changes in this small Civil War town. She can remember when Newtonia had a grocery store, post office, bank and beauty parlor. And she remembers the sadness when these businesses left town.

One of the biggest events in Newtonia was the formation of the Newtonia Battlefields Protection Association.

JoAnn was made a member of that board in the beginning and she continues to serve.

“I’m very glad we have the Newtonia Battlefields Protection Association,” JoAnn said. “I think if we get anything going in this town, it will be because of that group.”

The Newtonia Betterment Association is also an important part of the community. JoAnn has been a member of that organization for several years and currently serves as treasurer. This group began as the Loyal Neighbors, a ladies’ social club. Members of the club decided Newtonia could use a community center so they began a drive to purchase a piece of land and build a center.

Today, the Newtonia Community Building is the heart of the town and often is used for meetings, parties and celebrations. JoAnn, along with her husband Bill, takes good care of the building. They do the general cleaning and maintenance, and JoAnn books the building for those who want to rent it.

JoAnn is also on the board of the “old cemetery” in Newtonia. She and Bill have taken the responsibility of marking the graves before funerals. JoAnn also has taken it upon herself to clip and save all the obituaries of Newtonia area residents.

When JoAnn is not working some good cause in her hometown, she likes to walk and do genealogy.

“I try to walk about six miles every day,” she said. “I just walk on the dirt road near my house.”

For many years, she has done genealogy research, hunting the history of both the Turner side of the family and her own family, the Clarks. Her research is done primarily in the Neosho-Newton County Public Library and over the Internet.

“I’m having more problems with the Clarks,” JoAnn said. “As I search, I usually find people who can use my help more than they can help me.”

JoAnn grew up near the small community of Aroma and attended grade school at Granby. Her father was a Granby miner, who died when she was only 8 years old. After her mother remarried, the family moved a couple of times to California but eventually returned permanently to this area.

JoAnn and Bill have two daughters and one son—none of whom have shown any interest at all in JoAnn’s genealogy.

“I don’t think any of them are interested, but I have warned them not to throw it away when I’m gone,” she laughed. “I’ve worked too hard to get all that work done.”

But there may be hope for another generation of family historians since JoAnn has three granddaughters. Perhaps one of them will take an interest in family history and carry on the good works of Today’s Woman—JoAnn Turner.