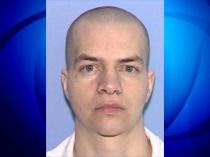 Richard Tabler, convicted in 2007 of the murders of two people connected to the Teazers strip club in Killeen, Texas, wants to waive his appeals so he can receive the death penalty:

But Appeals Attorney Karl Krug says Tabler won’t get his way until two proceedings take place. One of those, a jury trial, is already over. But the Court of Criminal Appeals is currently deciding the case.

“So whether he wants to get executed right now is irrelevant,” Krug said.

Tabler has used multiple tactics to help seal his own fate. One of the most widely publicized was when he used a smuggled cell phone from inside his prison cell to call a State Senator from Houston, John Whitmire, to make threats against Whitmire’s family. The incident prompted Governor Rick Perry to order a lockdown of all state prisons.

“The object of those calls is not to intimidate these people, the point is to get himself executed as quickly as possible,” Krug said.

Two others were also allegedly murdered by Tabler and his partner in crime, 2004 East Newton High School graduate Timothy Doan Payne of Granby, who was a soldier at Fort Hood at the time. Payne recently lost his appeal after being convicted and sentenced to life for his role in the murders.
Posted by Randy at 5:15 AM