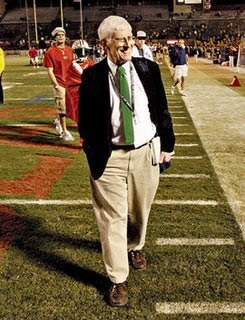 Retired Tucson Citizen sports columnist Corky Simpson, a Carthage native and at one time the sports editor of The Carthage Press, is under fire on the blogosphere and elsewhere after word got out last week that he failed to include former Oakland A's and New York Yankees outfielder Rickey Henderson on his Hall of Fame ballot. From the San Francisco Chronicle:

Some voters are fussy about picking anyone on a first ballot. Some voters simply are neglectful.

Case in point: Corky Simpson of the Green Valley News & Sun in Arizona, who last week revealed his ballot in a column. He chose eight players, including Matt Williams. Not Rickey Henderson.

Simpson, who turns 71 Tuesday, said he never had a negative encounter with Henderson. In fact, he said Henderson is deserving and that he made a mistake by omitting the steals king from his ballot.

"I was in a hurry, and I goofed up," Simpson said in a Thursday phone interview. "If I could get the ballot back, I'd put him on the top. There's no deep meaning to this. I have no reason not to vote for Rickey. I sure wish I had now. He was a great ballplayer.

"If I'm the reason it won't be unanimous, I'd feel horrible."

This was Simpson's second Hall of Fame ballot. To get a vote, a writer must be in the Baseball Writers Association of America 10 straight years. Simpson, who previously worked at the Tucson Citizen, joined the Arizona chapter when the Diamondbacks joined the majors.

From the Oakland Tribune:

In a Dec. 9 column explaining his Hall of Fame picks, Simpson, who writes a weekly column for the Green Valley (Ariz.) News & Sun, cited eight choices. He relegated Henderson to a list of also-rans without explanation as to why he didn’t vote for him.

Green Valley News sportswriter Nick Prevenas said he warned Simpson about leaving Henderson off his ballot when Simpson filed the column, but Simpson told him he “wasn’t a Rickey guy and that he would vote for him next time.”

Simpson created a national sensation in 1992 when he was the only voter who voted for Alabama over Miami for the entire season in the AP college football poll. He was vindicated when the Crimson Tide won the national championship.