Champion out at GateHouse Media, replacement to receive double his salary 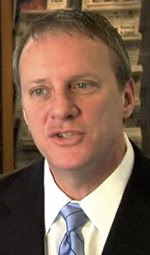 GateHouse Media stock is selling for seven and half cents per share on the Pink Sheet at the close of trading today and the company has been under the gun for months.

Nonetheless, CEO Michael Reed has pushed aside one of the last connections to the old Liberty Group Publishing, president and chief operating officer Scott Champion and replaced him with a man who will earn more than twice the base salary Champion made in 2007.

Filings with the Securities and Exchange Commission indicate that at a time when many GateHouse employees are wondering if they will have jobs a few months down the line, new President and COO Kirk A. Davis (pictured) will receive a base salary of $461,260.80. Champion's base salary for 2007, according to a proxy statement filed with the SEC was $200,000. Even with $173,000 in bonus and benefits Champion made nearly $90,000 less than Davis' base salary.

The SEC filing indicates Davis will normally receive four week paid vacation...except in 2009 when he will receive five weeks because he is carrying one over from 2008. Other benefits Davis will receive include vacation, sick leave, and participation in company medical and dental insurance programs. He will also be reimbursed for travel, meals, and accommodations, the proxy said.

If Davis is fired for cause he gets nothing other than the salary and vacation to which he is entitled, but if he leaves the company for any other reason, he will be sitting pretty, according to the SEC filing.

If GateHouse determines Davis no longer fits in with the company he will receive a year's salary, any unpaid bonus and continuation of his insurance coverage.

As good as Davis' deal is...and believe me, it is good...it pales in comparison to the benefits and salary received by the man who hired him, GateHouse Media CEO Michael Reed, the former CEO of Joplin Globe parent company Community Newspaper Holdings, Inc.

The generosity with which GateHouse Media treats his top officials is not matched by what it shows its faithful employees- the back of the hand. As evidence, consider the following memo, issued by Reed to all GateHouse employees earlier this month when he announced GateHouse would no longer match its employees' 401K contributions:

Our nation is experiencing difficult economic times and 2008 was a very challenging year in terms of revenues for all media companies. While GateHouse performed better than most, we were not immune to the economic slowdown. In response to these pressures, GateHouse continues to look at all the options it has to help control costs and remain a competitive company in the event that the current slowdown worsens or lasts longer than expected.

We look forward to working through a challenging 2009 and to coming out of this economic downturn a strong and viable company. We sincerely appreciate your efforts and contributions throughout 2008.

Certainly taking strong steps like eliminating the 401K match and bringing in a new president and COO with an extra quarter of a million in pay will restore the employees' confidence in the beleaguered company.
Posted by Randy at 7:41 PM

As a former employee of one of Gatehouse's properties, I can say with great confidence that Kirk Davis was in over his head 6 years ago as an executive. This new appointment for him is probably the equivalent of the Detroit Lions bringing back Matt Millen.

What do these media executives do to earn their salaries other than cut costs? They certainly aren't being rewarded for creating new business and new streams of revenue. I believe the "brightest" accomplishment that Davis can claim some credit for in these last few years is the rebranding of the townonline.com portfolio of web sites under the wonderful moniker "wickedlocal.com."

Excuse me while I throw up in my mouth.

I also am a former Gatehouse Media employee and I can attest to the fact that Gatehouse does very little to compensate it's regular employees who are the backbone of the company. I left Gatehouse voluntarily because I was appalled at the way they handled the day to day operations. It is no surprise to me that their stock continues to loom at the bottom of the scale. Mr. Champion was not a great loss to the company but hiring another at the price they did shows bad judgement.

Check your facts sir. The SEC filing says Champion is no longer President but remains with the company as a regional manager. I doubt his role changed, probably just the title

Check your facts. The people who came over from Liberty Group Publishing have been slowly, but surely removed from positions of power at GateHouse. Champion remains with the company, but that is about it.