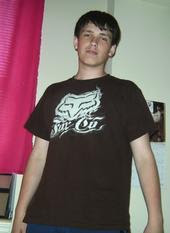 KOAM and KODE did not let Judge Neal Quitno's decision to prohibit cameras in the courtroom keep them from turning in solid reports on the arraignment of 17-year-old Garrett Mason or their 6 p.m. newscasts. Mason is accused of stabbing Anne Reed, 18, and Kylie Leyva, 14, of Nevada Monday.

Both stations opened the newscast with the arraignment story. KODE's coverage featured interviews with Vernon County Prosecuting Attorney Lynn Ewing, while KOAM opened with Mason's perp walk, including a woman shouting at Mason, "Do you see what you've done, you loser? I hope you rot in hell!"
Posted by Randy at 4:01 PM