Chart editorial: Give Bruce Speck a break; he's not such a bad guy 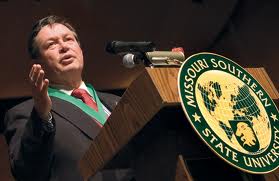 If past Chart editors and reporters weren't still alive, they would be rolling over in their graves.

An editorial in the latest edition indicates that the current Chart staff believes University President Bruce Speck's ideas of shared governance are not so bad and staff members cannot understand why the faculty is making such a big deal about it.

Naturally, the staff invested in many hours of painstaking research before arriving at this conclusion.


Before coming to Missouri Southern, Speck penned an article refuting the definition of shared governance as presented by the American Association of University Professors and presenting his own.
Members of our staff spent hours this week analyzing Dr. Speck’s article.
Frankly, we’re not sure why it has garnered so much attention, especially now, years later.
Speck makes no bones about his disagreement with the AAUP’s stance, but doesn’t ever attack or put down faculty.

It is a shame that the staff has not spent hours digging into the background of the battle between Bruce Speck and the university faculty, or even more hours looking into Speck's background, particularly his time at Austin Peay University. If that research had been done, rather than a thumbsucking session strictly centered on the contents of this article, perhaps a more enlightened and informative editorial could have been written.

Actions have to be considered, just as much or more than the words on the written page.

The article concludes in this fashion:


Speck attempted to make it abundantly clear that he was addressing his article Wednesday “with the intention of promoting effective shared governance at MSSU.”
Southern has a shared governance task force, which has devised the University’s philosophy, principles and goals for shared governance.
The document that outlines these points has been presented to, and approved by, the Faculty, Staff and Student Senates, the President’s Council and the Board of Governors.
That would suggest to us that everyone is on the same page when it comes to shared governance.
So what’s next? It’s time for everyone to stop talking about this and start living it.

Nice thoughts, but considering the events of the past few years, in other words, practically everything that has happened since Bruce Speck became Missouri Southern State University's president, it would seem that the campus newspaper would at least maintain a healthy amount of skepticism, while encouraging both Speck and the faculty to work toward effective shared governance.

Then again, this type of editorial may be exactly what it seems- evidence that the Speck administration's long campaign against independent on-campus journalism, with tactics ranging from removing copies of the Chart from a campus recruiting event to the harassment and removal of former advisor T. R. Hanrahan.

One of the best tools for promoting a productive Missouri Southern State University is having strong newspapers that can cover campus news without fear or favor.

At one time, that included the Joplin Globe and the Chart.

It appears the Chart's came to a close with Hanrahan's departure.

And then there were none.

Speck is the exact reason I am not going to MSSU. Once they started cutting their Language Department it was a done deal.

Fortunately, self-centered, selfish student Joey Capehart did not enroll at MSSU with his vast understanding of funding priorities.