Cynthia Davis: We don't have a gun problem; we have a culture problem 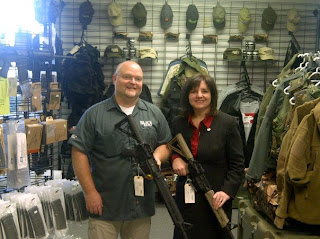 In her latest State Talk column, former Rep. Cynthia Davis, R-O'Fallon, (yes, she's still around) aims her guns at those who would oppose her guns.

The way things are going, if Obama would threaten to ban the Bibles, it might increase our sales.  (www.backtobasicsbooks.com)As the gun and ammunition dealers are seeing customers line up to buy their products, it appears as if more people value their guns than Bibles.

Legislators are clamoring to file new gun laws right and left.  E-mail messages are flying with concerns from all corners of the spectrum.  If you live in Missouri, you can be confident that there are enough gun sympathizers from both parties that the legislature will likely not do anything to restrict our current rights.  Sometimes it appears that the legislators are filing bills just to see how much everyone will react.  My big brother used to try to scare me and sometimes it worked, but it's not nice to treat your constituents that way.  The only acceptable solution is to refuse the urge to panic.

The Sandy Hook tragedy didn't happen because of bad laws and cannot be remedied by creating more laws.  It's okay for us to pause and grieve over the tragedy without creating another injustice by punishing more of the innocent and retaliating on the general public.  The increase in violence is directly correlated to the break down of the family.  We don't have a gun problem.  We have a culture problem.  A "cultural problem" can only be logically answered with a "cultural solution".
When the family, church and communities were stronger, people naturally contained evil through their critical mass.  There will never be enough government handcuffs, rules, regulations or programs to make up for the loss of a vast network of caring citizens who provide integrity to our social fabric.
While some foolish politicians are trying to grab the headlines with their panic-minded legislation, we need to be ever vigilant to observe a pattern.  All countries that have been taken over by tyrants lost their ability to defend themselves before they lost their freedom.
Those seeking to destroy the constitution know they can't do it in one step.  Their plans involve using the most egregious examples to undermine our bill of rights.  We are seeing knee-jerk reactions even from those who were elected on a promise of being in favor of freedom.
Posted by Randy at 9:43 AM