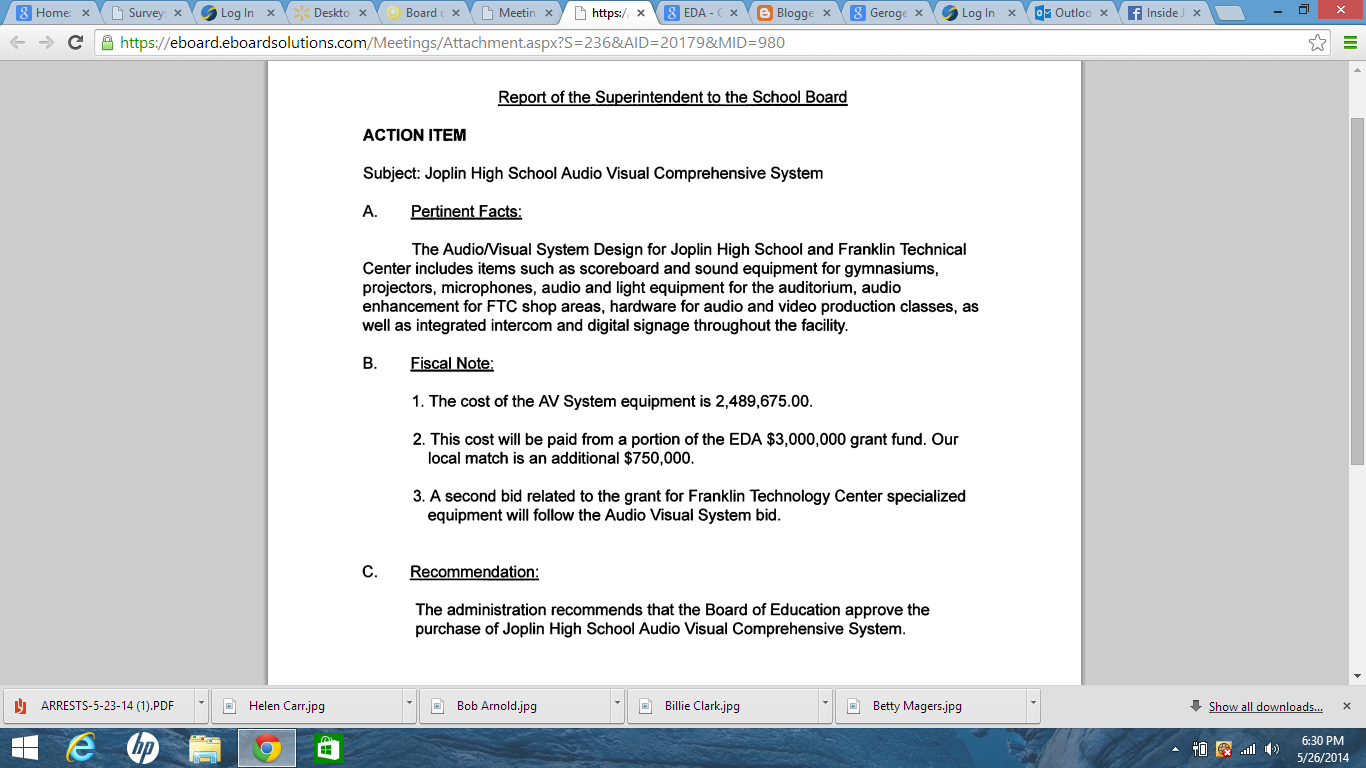 One week after telling all part-time reading teachers that their jobs are history, Superintendent C. J. Huff will recommend to the Joplin R-8 Board of Education that it buy a Jumbotron for the new Joplin High School gymnasium.

Of course, reading teachers are not the only ones who have been given the ax recently by Huff as he scrambles to salvage an ever-worsening financial situation and seems to be the brink of asking the voters to bail him out.

One of Joplin High School's two police officers has been told he will not return for the 2014-2015 school year and cuts have also been made from the secretarial and janitorial staffs.

The Jumbotron is part of a nearly $3 million audio-visual comprehensive system that Huff has recommended that the board approve when it meets at 7 p.m. Tuesday in the Administration Building at 32nd and Duquesne.

It is described by only one word, "scoreboard" on the documentation that has been provided to the board and which is available to R-8 patrons on the district website and it is lumped in with sound equipment, projectors, microphones, audio and light equipment for the auditorium, and audio enhancement for Franklin Technical Center shop areas, as well as hardware for audio and video production classes, and integrated intercom and digital signage across the building.

The money, according to the proposal, will come from an EDA grant, which is supposed to be used for the benefit of Franklin Tech students.. Reportedly, Administration has been able to get this approved by the Economic Development Administration by emphasizing the parts having to do with Franklin Tech and treating the Joplin High School audio and video production classes as if they were Franklin Tech classes, though the ones who are allowed to take those courses are JHS students.
***

Isn't that a prime example of misappropriation of funds again? That money was meant for the kids at FTC, and what were they going to do with it that they won't get to do now? I'm so angry I can't believe it.

Now, how much more does the board, or the public, need to see to get rid of Huff? He's stealing from the children directly, now, and hurting their education while he's doing it, so we can have another flashy googaw for the media. Shame on you, Huff, shame on you.

This is a moral outrage. It's hardly the first, but we can pray it's the last.

The new board better say no. Just no. No to everything. Send Huff packing and take care of the important part of education.

They'll be hiding all kinds of tricks through FTC, won't they? How convenient. Disgusting.

If Huff wants a jumbotron, can't he get some wealthy friends like the Banwarts to donate it for him? The studnets shouldn't have to pick up the tab for him and get cheated in their programs. What kind of career school takes career program money and spends it on the athletic facilities?

What are the dimensions of the jumbotron? Where is it listed online or in a report that can be verified and investigated?

There is no way they can discuss this in closed session if it is subject to vote. Therefore, as a taxpaying patron I will expect to see some public debate, for once, in the open session. And it damned sure better not result in a 7-0 vote, unless, of course, it's for once going against that egomaniac Huff.

If this get approved. By the board they should be recalled.

Kind of makes you wonder what else he has stolen from the children from their donors, doesn't it? All that money just dumped in Bright Futures and no one to monitor it. Yes, Huff is the equivalent of stealing candy from kids on Halloween. Good grief. Get rid of him. Tomorrow. It could be the first official vote of the new board.

This whole mess with the Huff Administration seems like a nightmare that never ends. In actuality, he's only been here for six years. Before that, the district, and the old JHS, was quite successful. What changed? Huff and Bess blew in and wanted to gain fame by innovation instead of by elbow grease and careful thinking. What a shame.

We will only know how much money there is and how much money has been spent where with an audit, and that seems to be hard to get accomplished. Instead, R8 is bouncing checks and is unable to pay its bills why its great leader continues to deprive students of a quality education.

Dear leader's employees and students will be able to see the speeches better with this Jumbotron.
Imagine all the learning that will be happening!

Besides, nearly all the cool schools already have them.

How did you get "Jumbotron" out of the word scoreboard? Where are the supporting facts that tells us the scoreboard is now a Jumbotron?

Interesting after so many cuts have been made to FTC. The BOE and administration could not care less about FTC until they need to use it to justify unnecessary and expensive equipment that will probably never be used by FTC students.

Lets just see if Turner is right about the Jumbotron. He has been right on this type of thing before. Also, if R-8 wanted to buy a Jumbotron, what are the odds that any public document would be released to the public with that word on it before the board voted to approve it?

I know the money for buildings and such comes from a different place than salaries but this is just nuts.

Oh boy! I can't wait to see that jumbotron.
7-0 vote.
VERY disappointed.
Won't vote for ANY of those board members again.
Everyone, start looking for some people that will make good replacements.