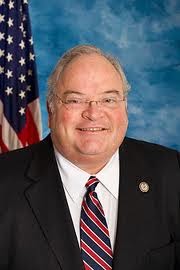 In a portion of his latest newsletter, Seventh District Congressman Billy Long addresses the Benghazi issue:

This administration has not been truthful with the American people about the deadly attack in Benghazi on September 11, 2012, which resulted in the deaths of Ambassador Christopher Stevens, Sean Smith, Glen Doherty and Tyrone Woods.

Our nation’s credibility is in jeopardy. A nation which cannot tell itself the truth about the death of its own brave citizens is not a nation which can be relied upon to vindicate its alliances, fight for its principles, or safeguard its interests abroad. We have an obligation to honor those four men who died in service to their fellow citizens half a world away from their home.


It is obvious that our diplomatic mission had insufficient security and that the response by American forces in the region was too slow to stop the terrorist attack before it could kill four Americans. Many Americans are concerned that the threat of terrorism was disregarded and that the inept reaction once the attack was underway was the result of a deliberate choice on the part of the Obama Administration, instead of battlefield confusion which accompanies all conflicts. Any time American citizens are attacked and killed by terrorists we should immediately correct any mistakes or bad policies which prevented the rescue of our personnel. The American people deserve a full account of what went wrong in Benghazi and who was responsible.

The families of the four victims of this terrorist attack and the nation as a whole deserve to know the complete truth about what happened on that fateful night in Benghazi.
Posted by Randy at 6:21 AM

Billy,
In 1983, during Ronald Reagan's presidency, 241 American soldiers died in a terrorist attack in Beirut, Lebanon. It was the heaviest loss of American servicemen and women since WWII. The Democrats held a majority in the House at the time, and somehow they were able to resist turning this horrible tragedy into a political circus.
Please stop this nonsense.