C. J. Huff to family members: We have the right to fire you at will 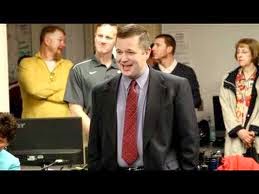 On the same week that C. J. Huff released the video of his annual report, referring to the family in the Joplin R-8 School District, like any stern disciplinarian patriarch, he threatened to cut off some of his family without a dime.

Earlier this week, when classified employees received their paychecks, they also received notices issued by Huff and his enforcer, Chief Operating Officer Tina Smith (the brutal older sister that no family should ever have) letting them know that they can be fired and they do not have to be given notice.

Just pray you are never invited to any of the family dinners.

The timing of this notice may not be good for C. J. Huff. Sources tell the Turner Report that R-8 Board members, including some who have supported C. J. Huff since his arrival, are not happy that he plans to deal with the district's financial problems (which, interestingly enough, were never mentioned in his annual report) by cutting from the bottom and eliminating cooks, clerical workers, bus drivers, and janitors, instead of the costly teaching/learning coaches, career pathway coordinators, and the layers of extra administrators who have been added at the district fortress at 32nd and Duquesne.

I've heard the state is planning to review the district's finances. Do you know anything about this?

I have heard that, but I don't have enough to print at this point.

Where is a copy of the notices about being fired at will?

Guess he wasn't paying attention when Dr. Speck went through his troubles out at MSSU--no matter how much you build up admin yes-men levels, when it hits the fan you stand alone.

Mr. Turner, would you print the notice given to the classified personnel? I think it would be great to show the public the crap/fear the employees have to deal with. Thank you!

You should be worried about reproducing that letter. A crafty administrator might have some slight variations in documents issued thus allowing the source of leaks to be identified.

If you could see the CC list in the email sent to you that would pretty much eliminate that possibility, yes?

7:07 Want to bet your job on that? You shouldn't take that bet. There are security companies you can hire to do things like exposing leakers.

Yeah, 10:17, I'll take the bet since you sound more like you're trying to stifle conversation by putting fear into people than trying to promote transparency. If you were here to help, you'd suggest a work-around, or perhaps you're too busy providing Huff with a reach-around?

Meta-data isn't going to be present when Turner copies text into note-pad then re-formats again into a blog. If he knows more than one employee who has the same message, and I suspect Turner knows more than one R-VIII employee, it would be pretty easy to cross-check for obvious discrepancies.

Further, If the district were actually paying an agency to capture leakers, this would in fact be more ammo for anyone who feels Huff is wasting money. It would further support the argument that Huff treats employees like the enemy and promotes a stifling atmosphere. You appear to be a product of this climate yourself! Regardless of the image that the Huff administration wishes to promote, he has created a divisive atmosphere - see the election of Fort and the "bye-bye" to Flowers. That's what authoritarianism gets you - divisiveness. Politically, the only way out is to actually foster a sense of unity. It would be ridiculous to do what you're suggesting, and I know he's not smart enough to do it on his own.

7:07---there is a blind cc that won't show up.
4:58---the district has in house people do their spying and they are not interested in promoting an atmosphere of unity.

Our host and the people feeding him information don't have to practice much in the way of operational security to keep Huff and company in the dark.

Basically don't use a district computer or their network, don't forget to choose "Anonymous" when commenting on this blog, don't fall prey to a "Canary Trap" in quoting district documents (although note the Barium meal test approach mentioned in the Wikipedia article), avoid using unique turns of phrase in the above, etc.

Our host doesn't to my memory straight out quote anyone except commentators to this blog; he's been playing this game for many many years.

Otherwise Huff and co. are SOL; neither Google (which hosts this blog) nor Microsoft (which provides his email account) are going to divulge private information without a legitimate subpoena.