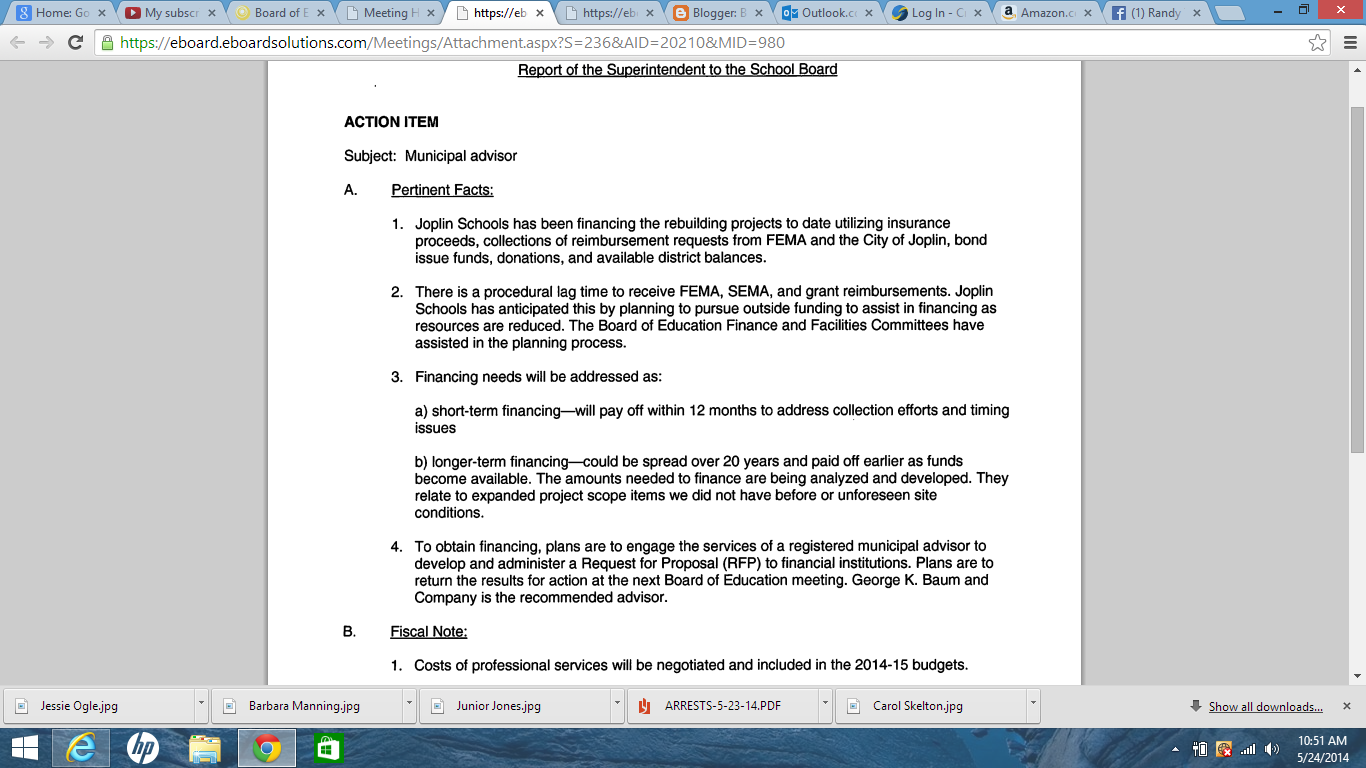 Nowhere in that report did Huff mention that the Joplin R-8 School District is in serious financial trouble.

The reason, Huff will tell the Board of Education Tuesday night is that he has not yet received money from FEMA, SEMA, or from grants the district has applied for and received.

The document that accompanies this post is a screenshot of Huff's request to pursue outside financing, both short-term and long-term loans, to keep the district afloat.

Huff and Chief Financial Officer Paul Barr have signed off on a request to hire a municipal adviser, recommending George K. Baum and Company, to seek bids from financial institutions for these loans.

How much money will the district need?

Huff doesn't know, according to the document. "The amounts needed to finalize are being analyzed and developed," the report says. "They relate to expanded project scope, items we did not have before or unforeseen site conditions."

As has been noted earlier this week in the Turner Report, Huff has already began slicing jobs, including those of secretaries, custodians, technology department workers, and even a high school police officer. None of the cuts, as of yet, have come from the teaching/learning coaches, or the layers of upper and middle administration employees that have been added since C. J. Huff became superintendent in 2008.
***

No need to wait for the Fourth of July when there is the Turner report.

They are broke and they want to hire someone to fix it. Just fire Huff and that will fix it.

Also, get rid of people at the bottom who depend on every dollar in order to make a living rather than ask the people who have more than enough to make a sacrifice.

If I were talking about Huff to you in person, this is the point where I would start singing "Narcissistic" to the melody of the "Hallelujah Chorus". Because it's catchy.

How many current principals (and assistants) were TLCs.

How many teachers have left since Huff and Bess came to town?

Huff can get a 2nd job with the joplin city counsel!

CJ Huff will single handedly bring down ALL the recovery efforts for Joplin. Think about this. When this finally comes out to the public. It WILL go nationwide. You will have national reports in Joplin talking about the disgrace that is the Joplin R-8 administration. Local groups that are helping and that are screaming for help from volunteers to continue to come to Joplin to help will see not a single sole. Cj not only will have damaged the reputation of the R-8 district but it will have ripple effects for the city of Joplin and its own recovery efforts. If CJ is so hell bent on having his name in history books then by all means Joplin BOE do not do anything and allow this man to ruin you and this district. But if you have any ounce of respect left then do the right thing and let CJ go before the new school year. He does not need to be here for the opening of the new high school.

It will be interesting to see what the board does tomorrow night.

The beginning of reducing money spent is decreasing the enormous amount of money those at the Taj Mahal aka Administration building are making in salary. They are receiving way above the amount commensurate to the job performed. I mean $90 a year for someone who sits in an office on account created job.

maybe if administrators were fewer and farther between it would help. and maybe they should make the state average. teachers don't make the state average in joplin. they make a lot less. but administrators make a whole lot more than the average and we have more of them than anyone needs. get rid of half of them. and cut out the Easter egg hunts for ad building leeches. it all adds up.

Huff's incompetence is staggering. It's just not believable the damage he has done in six years. What is more incomprehensible is that he has been allowed to stay here and continue the onslaught. Outrageous, irresponsible oversight on the Board's side.