Ed Emery to Butler woman: If you want Medicaid, move to Oregon 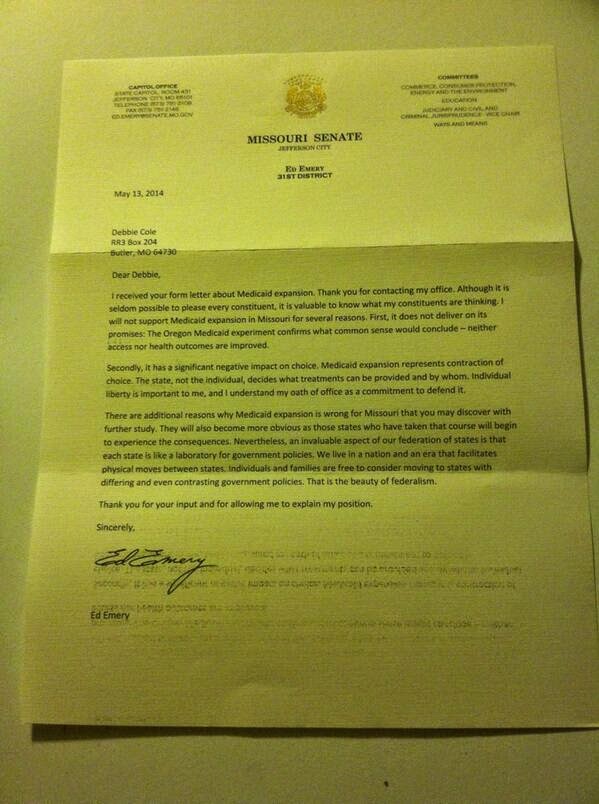 Progress Missouri and the St. Louis Riverfront Times are putting the spotlight on Sen. Ed Emery, R-Lamar, for a letter he sent to a constituent asking about Medicaid.

In the letter, Emery suggests that if the woman wants Medicaid, she can move to Oregon. This coming, of course, from someone who has no problem affording health insurance.

"There are additional reasons why Medicaid expansion is wrong for Missouri that you may discover with further study. They will also become more obvious as those states who have taken that course will begin to experience the consequences. Nonetheless, an invaluable aspect of our federation of states is that each state is like a laboratory for government policies. We live in a nation and an era that facilitates physical moves between states. Individuals and families are free to consider moving to states with differing and even contrasting policies. That is the beauty of federalism."

Emery told the Riverfront Times he was not telling her she should move to Oregon. "I try to make them understand the choices they have and let them know what their best options are."

Emery says he wants Ms. Cole to stay because Missouri is heading in a better direction for health care.
Posted by Randy at 6:25 PM

What an insufferable prick. He needs to be voted out of office, he does not care for the people of Missouri.

dear mr. congressman- I would like lots of free stuff. I could have a job but it would be too much trouble. Other states give lots of free stuff so why don't we? Who cares that someone has to pay for it as long as it is free for me. And if you don't give it to me I will vote for someone else- you insufferable prick.

dear mr. congressman. thank you for your efforts to remake missouri. it must take a lot of hard work to regress a modern state to the levels of freedom from government overreach and do-goodism experienced in places like mogadishu.

it will be more convenient for the missionaries to work with the starving and homeless when they do not have to travel by airplane to the heathen lands.

I just love it when people assume that the person was looking for free stuff. Since no one saw fit to print her letter. I guess people take it for granted that she is a freeloader. Maybe she is a hard working single mother with children who can't afford medical insurance. So to 7:46 PM, I will make an assumption that you are a judgmental S.O.B. and I hope that you never find yourself in a situation where you need free stuff.

To 6:43 you are right about me- I don't like handing over my hard earned money -no questions asked- because other states do it. and if not liking freeloaders makes me a sob I can live with that. Interesting that you make assumptions about me on very limited information- what does that make you? a liberal judgmental sob?