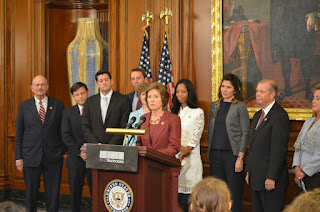 
Congresswoman Vicky Hartzler’s bill to fight America’s sex trafficking epidemic passed the House of Representatives today. The Empowering Law Enforcement to Fight Sex Trafficking Demand Act, HR 2480, opens up more Department of Justice grant funding so law enforcement can fight sex trafficking on the demand side, arresting the men purchasing sexual acts from abused women and children.
“Women and children around the nation, and even in Missouri, are being victimized every day by a sex trafficking industry that takes their life, hope and dignity just to make a profit,” saidCongresswoman Vicky Hartzler (R-MO). “My bill addresses the epidemic of sex trafficking by giving police officers the resources they need to go after the criminals behind these terrible crimes.”

The National Human Trafficking Hotline reports that as of 2016 Missouri ranked 17th in the nation in reported human trafficking cases with many of those cases involving minors.

“Our officers are asking for more resources to protect the victims and bring justice to these criminals, and we need to back them up,” added Hartzler.

Police programs to combat demand can involve police officers posing as women engaged in street-level prostitution to capture buyers. Authorities can also place decoy advertisements online and set up reverse stings at a hotel or apartment. The funds could also be used for education efforts on sex trafficking.

“We are very pleased the House has passed Congresswoman Hartzler’s bill to fight the sex trafficking epidemic,” said Swanee Hunt, Founder and Chair of Demand Abolition. “This is a lucrative industry that can be stopped by holding buyers accountable. Representative Hartzler’s crucial bill equips law enforcement with the tools they need to protect the most vulnerable girls and women among us.”

Many law enforcement agencies practice demand reduction programs or would like to practice them but don’t have the resources to fully invest in keeping sex trafficking out of their areas.
Hartzler is also working on a second sex trafficking bill that would expand grant opportunities to provide housing for women who have been victims of sex trafficking. The bill adds sex trafficking victims as an authorized recipient of transitional housing assistance grants. This legislation opens up a new avenue of funding for sex trafficking victims so they can have a new start.
Statistics:
·         The National Human Trafficking Hotline reports that as of 2016 Missouri ranked 17th in the nation in reported human trafficking cases.
·         It’s estimated that there are over 20 million people enslaved around the world but that few of them are ever identified as human trafficking victims.
·         Nationally, in 2016, the National Human Trafficking Hotline received 26,727 calls and 7,572 human trafficking cases were reported.
·         More than 20 million people worldwide are affected by trafficking each year.  The International Labour Organization reports that three out of every 1,000 people are "trapped in jobs into which they were coerced or deceived."
Posted by Randy at 4:54 PM