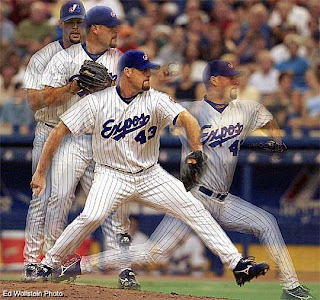 As San Diego Padre great Tony Gwynn in inducted into the Baseball Hall of Fame in Cooperstown, N. Y. today, his career is being reviewed in publications across the United States.
In the hometown San Diego Union, Joplin realtor Dan Smith, a Girard, Kan. High School graduate, talks about giving up Gwynn's historic 3,000th hit in August 1999:

It wasn't a fair fight. The Expos were starting a rookie, Dan Smith, and a right-hander at that. Smith did well to get a 1-2 count.

Smith, now a real-estate broker in Joplin, Mo.: "I'm from Southwest Missouri, so I knew what an electric atmosphere there would be in St. Louis for Tony and how well those fans would treat him (at Busch Stadium). We were on the flight from New York to Montreal when somebody said he'd gotten No. 2,999 in St. Louis and he'd be going for 3,000 against us. I thought, 'That stinks for him, having to come to Montreal for such a big milestone.' So unfortunate. One of the best hitters in the game – arguably the best of all time – has played his entire career in an overlooked place like San Diego. And now he's going for 3,000 in Montreal. I really wanted to get him out and be the one who didn't give it up. I was 23 years old and had delusions of going seven innings and getting him out four times. In hindsight, I'm glad he got it off me. It's as close to the Hall of Fame as I'll ever get without having to buy a ticket ... I threw him a slider, down and in, and he punched it over second base, a typical Tony Gwynn hit. The coolest experience happened the next day. I'm taking pitcher's batting practice and he came out and pulled me aside. I was just thrilled by that. When I was a kid, Tony Gwynn was one of the guys I pretended to be in the back yard, hitting Wiffle balls. Now he's talking to me. He said, 'Whether you like it or not, you're a big part of a special day for me and my family. I hope it doesn't offend you, but I want you to have some stuff as mementos.' He gave me a jersey and bats and baseballs. How cool is that? A few weeks later, we were in San Diego, and it just happened that that was 'Tony Gwynn 3,000 Hit Poster Night.' Tony sent me over a signed poster that said 'To Dan, It was a good pitch, Tony Gwynn.' Such a classy guy. Such a gentleman."