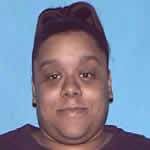 A former Missouri Department of Revenue employee, who used her access to personal records as part of an identity theft scheme, pleaded guilty today in U. S. District Court for the Western District of Missouri.
Erica Daniece Kelley (pictured) pleaded guilty to conspiracy to defraud during a nine-minute hearing in the federal courts building in Jefferson City.
Also pleading guilty to the same charge today was Brenda McKay Adams.
The plea agreements for both women described the scheme. According to the agreements, Ms. Kelley, Ms. Adams, Clayton Deardorff, Robin Deardorff, Angie Roark, Krystal Stephens, Anna Stephens, and others took personal identification, including names, Social Security numbers, and dates of births to commit fraud, theft, and other crimes. "In part, they stole and acquired personal information, and used this information to start phone service at homes as well as cellular service. The defendants would then pass the information through Robin Deardorff to persons already in prison, including Clayton Deardorff. The prisoners then would use the phone service without cost to them, or to the person they were calling, or to any of the defendants."

The scheme cost the telephone companies more than $80,000, according to the plea agreements. "Additional losses were incurred by credit card companies when the defendants opened credit card accounts using the stolen identification information."

Just amazing. I am sure they will get a slap on the wrist though.