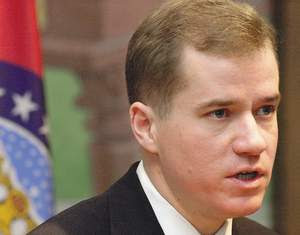 The two biggest contributors to the Swift Boat Veterans for Truth, the organization that probably ended Sen. John Kerry's chances of being elected president in 2004, have pumped $350,000 into Gov. Matt Blunt's re-election campaign, according to the governor's second quarter disclosure report filed Monday with the Missouri Ethics Commission.
The documents indicate Blunt has received $300,000 from billionaire Houston, Texas, developer Bob Perry and his wife, Doylene. Perry was the largest contributor to the Swift Boat Campaign, according to Federal Elections Commission records, donating $4,450,000.
The Ethics Commission document also notes Blunt has received $50,000 from Harold Simmons, Coltran Corp., Dallas, Texas. Simmons was the second biggest contributor to the Swift Boat campaign at $3 million, according to the FEC documents.
It remains to be seen what will happen to these contributions following the decision issued Thursday by the Missouri Supreme Court restoring campaign contribution limits.
Posted by Randy at 11:31 PM