Memorial Middle School shooter to be tried in adult court 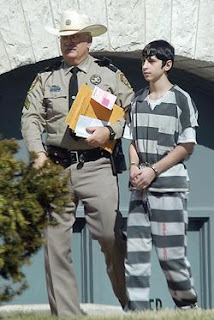 Memorial Middle School shooter Thomas Gregory White, 14, will be tried in adult court.
The ruling was issued Monday by Jasper County Circuit Court Judge David Mouton following two hearings in which White's public defenders presented evidence to show why his case should be remanded to juvenile court.
White had also received the support of more than 100 letters written on his behalf, thanks to a campaign by the national group Justice for Juveniles.
In the end, Mouton said Judge William Carl Crawford, who made the initial decision last year to certify White as an adult, did not err in his judgment:

"Defense counsel have asserted that there were various inadequacies in the juvenile court hearing in which the juvenile was certified to stand trial as an adult, that additional relevant evidence on numerous topics should have been admitted, and defense counsel have submitted in great detail what they believe the evidence should have been. This Court has carefully considered that additional evidence and is not convinced that the result in this case would have been any different had that evidence been introduced."

In his decision, Judge Mouton said White had been given due process. "The Honorable Judge William C. Crawford acted well within the Court's discretion under Section 211.070.1 and did not err in any respect in issuing the orders allowing Defendant to be prosecuted under the general law."

The case had originally been scheduled for an Aug. 6 trial, but that will be delayed until at least Aug. 20, according to Mouton.

White was 13 and a seventh grader at Memorial Middle School when he entered the school on Oct. 9 armed with an assault rifle, fired the weapon into the ceiling,and then allegedly attempted to shoot Principal Steve Gilbreth. Authorities say that failed when the weapon jammed. White is charged with two counts of assault, and one count each of unlawful use of a weapon, armed criminal action, and attempted escape.

(The photo accompanying this post was taken by Ron Graber.)
Posted by Randy at 2:44 PM

I do hope you have obtained permission from Ron Graber or Gatehouse Media for the use of thier photograph, Randy, as I see you've given no photo credit to either!

Hey, why not let Randy use it? It won't be posted on the Carthage Press or Neosho Daily News websites for a couple weeks when the story finally goes online. For all the talk in Gatehouse about getting more sophisticated online and how the web is the future, they sure don't give a crap about their own websites.

I actually took the picture from a website that did not say where it came from. I will gladly give credit if I can ascertain who took the photo. However, I would seriously doubt if anyone at Gatehouse would have any problem with it, since their newspapers have often located items on The Turner Report and then used them in their newspapers. (And I am not talking about stealing, I am just referring to story ideas.)

So it's OK to lift a photo that doesn't belong to you -- without permission or credit -- as long as there was no photo credit close to the photo on the Web site from which you copied it? Was there a general copyright at the bottom of the page?
Wouldn't be such a big deal, I guess, if you weren't a communications teacher in one of our local government schools. I'd expect you to set a better example for the middle school students.
Just because you think Gatehouse papers get some of their story ideas from your blog does not mean you can steal their property, right?

I did not accuse Gatehouse of stealing my stories and you know it. In fact, John Hacker at The Press and John Ford at the Daily have used my blog as a news source, and then went out and got their own information and wrote their own stories. There is absolutely nothing wrong with that. That is the way it should be done. If I find out for sure who took the picture, I will be happy to list the photo credit. I have done so in the past for photos that are not simple mugshots. As you can tell from the normal posts in this blog, I am diligent about citing sources for my information, whether they come from documents or from other media. You've had two shots, you've made your point.

Ron took the photo.
He took it under my direction.
Kaylea

Thank you. I will add the credit immediately.