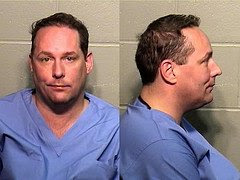 Sen. Chuck Graham, D-Columbia, was charged today with driving while intoxicated. It took the Boone County Prosecuting Attorney four weeks and three days to file the charges since Graham was arrested Oct. 20. According to the Columbia Tribune:

Bob Murray, Graham’s attorney, has filed a motion for a change of venue, stating that the defense and Cole County Prosecuting Attorney Mark Richardson, special prosecutor in the case, have agreed to move the case to Callaway County, according to court records. Murray previously had waived formal arraignment for Graham and entered a plea of not guilty.

Driving while intoxicated is a Class B misdemeanor punishable by up to six months in jail. Richardson, Murray and Graham could not be reached for comment Wednesday afternoon