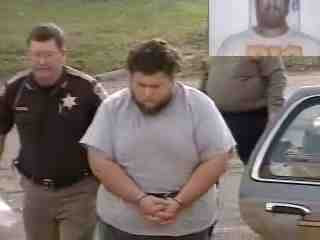 KY3, Springfield, is reporting that kidnapping charges are likely to be filed this week in connection with the kidnapping, rape, and murder of nine-year-old Rowan Ford of Stella.
First degree murder, forcible rape, and statutory rape charges have already been filed against Rowan's stepfather, David W. Spears, 24, of Stella, and family friend Chris Collings, 32, Wheaton.
According to earlier reports, the two men have confessed to the crimes.

(Photo: David Spears is taken into custody. KYTV)
Posted by Randy at 5:34 AM

This is such a tragedy,and please keep in mind the fellow classmates she attended school, as they are suffering as well, to the loss, and horrendous crime, please keep them in your prayers.
One question is who is Rowan Ford's biological father, and why has he not come forward ?
Little Rowan is free from pain now, and in God's Hands.

This sickens me to no end. That precious beautiful girl, violated in the worst possible way by the man who claims she called him "daddy". I started a blog because my mom went missing nearly 25 years ago. I know the anquish of the "not knowing", I do not know what it is like to discover the man you're married to raped/murdered your baby. This scum deserves the death penalty. Please check out karrielynnr.blogspot.com

Peace and prayers to Rowan's mom and siblings. And, healing to that little town.

Her dad died when she was an infant.

Is that Fat Bastard's brother?