(Note: I am reprinting this because, in retrospect, there are many clues provided as to what has been happening to the Joplin Globe over the past couple of years.) 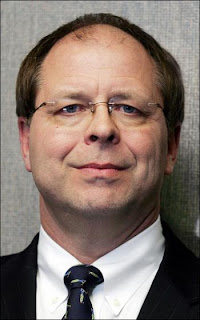 Michael Beatty became a newspaper publisher for the second time this week when he took the helm at the Joplin Globe. Hopefully, the Globe won't meet the same fate as Beatty's last newspaper.

The Baltimore Examiner published its last issue Feb. 15, 2009, after succumbing to the same dieease that has ravaged newspapers across the United States- decreasing advertising sales. Ninety people lost their jobs, with none of them, except Beatty apparently, knowing the newspaper was for sale (and with the current climate for newspapers, there were no buyers).

Beatty refused to comment to other media sources who wanted to ask him about the newspaper's demise. That strong, silent approach was probably attractive to the Globe's parent company, Community Newspaper Holdings, Inc., which has been notably reticent about revealing its own job cuts, buyouts, and furloughs, while having no problem whatsoever with revealing details about the same actions when they take place at other businesses.

In a column in the newspaper's final issue, Beatty opened with his philosophy of keeping the reader hooked- "Our secret to drawing readers was to keep our stories to 350 words or less." Unless Beatty's philosophy has changed, that should be disconcerting news to Joplin Globe readers who look, sometimes in vain, for stories that thoroughly explaining the issues that confront our community.

How he could tell this approach was drawing readers is anyone's guess is the Baltimore Examiner was an experiment, a free newspaper, which was delivered primarily to targeted, affluent areas of Baltimore.

Beatty took the helm of the Examiner in April 2006. The Examiner hired him from its chief competitor, the well-established Baltimore Sun, where Beatty served as executive director of retail sales. At the time, the Examiner was delivered to more than 200,000 homes every day of the week. Beginning in July 2008, home delivery was eliminated every day except Sunday and Thursday, with newspapers left in racks and at various locations throughout Baltimore on the other five days.

Even that last ditch measure was not enough to save the Examiner.

In the Joplin Globe's introductory article today, Beatty gave the following assessment of what he hopes to accomplish here:


“I hope to bring a sharp local focus, strategic outlook and marketing experience that we need to be successful and to build on the momentum that we have already created in our print and online editions, and in our magazines,’’ he said.