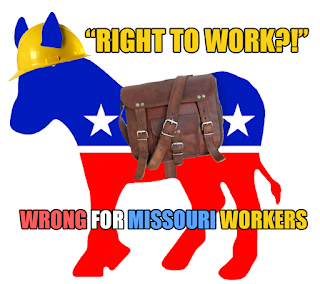 "This issue is critically important to Missouri's middle and working class. When passed in other states, 'Right to Work' legislation has harmed economies and lowered wages. Governor Nixon has stood with Missouri workers by issuing this veto and we must express to our Missouri Legislators that it be allowed to stand", emphasizes Executive Director of Southwest Missouri Democrats and Chair of the 7th Congressional Democratic District, Krista Stark.

"Right to Work" legislation will be harmful to Missouri's workers if the veto is overridden. According to Missouri Attorney General Chris Koster, "on average, this type of legislation, lowers annual wages by $1,558 a year for a typical worker."

We are pleased to welcome Representative Charlie Norr (D) from Missouri House District 137 in Springfield as a featured speaker.