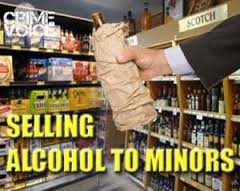 A teenager was sent into the stores to purchase alcohol.

The Joplin stores that sold to the teen were the following:

Eight Joplin stores did not sell to the teenager: