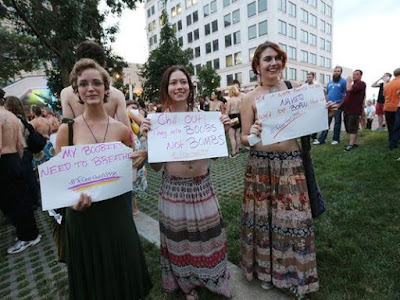 A Springfield woman and an organization called "Free the Nipple- Springfield Residents Promoting Equality filed a lawsuit against the City of Springfield today in U. S. District Court for the Western District of Missouri battling what they see as the injustice that allows men to display their nipples in public, but not women.

According to the petition, the group held protests against the ordinance in Springfield's Park Central Square August 7 and August 23, with group members complying with the law by marching topless with an opaque covering over the nipples, including the men in the group who covered their nipples out of solidarity. The city of Springfield responded in such a way that breastfeeding now violates city ordinance.

In response to that protest, Defendant repealed its previous ordinance and enacted a replacement. The new ordinance makes it a crime in Springfield to show “one’s genitals, buttocks, vulva, pubic hair, pubic area[,] or the female breast below a point immediately above the top of the areola, for the purpose of sexual arousal or gratification or which is likely to cause affront or alarm[.]” However, Defendant now exempts from this regulation “exposure of the female breast necessarily incident to breast-feeding an infant” and “performances of adult entertainment.”

In the lawsuit, the group attempts to explain what it sees as the hypocrisy of Springfield's ordinance:

In Plaintiffs’ view, the Springfield ordinance was discriminatory against girls and women by making it a crime to show their nipples in any place where they might be viewed by others while allowing boys and men to show their nipples at any time or place without fear of arrest or prosecution. 16. The development of male and female breasts is the same from fetus until puberty. Beginning at puberty, breast development stops for most males and continues for most females. As a result, for most males, the breasts’ ducts do not develop lobules or glands, and, for most women, they do. Both the male and female breasts have ducts, fat, sweat glands, nipples, and areolae. The new Springfield ordinance was sponsored by councilman Justin Burnett. According to the lawsuit,

The city council advanced three reasons for its new regulation of women:

a. Springfield has worked to be a “family friendly” tourist spot, and the breasts of women undermine this mission;

c. The reasons advanced by the city council demonstrate that the ordinance is in response to and targets the August protests.

The reasons advanced by the city council demonstrate that the ordinance’s purpose is to perpetuate stereotypes about girls and women and is a response to the council’s apparent view that the breasts of women are primarily objects of sexual desire.

Although advanced as a safeguard against moral decay, Council Bill No. 2015-227 eliminates § 78-222’s restriction on covered male genitalia such that men are now permitted to show their “covered genitals in a discernibly turgid state.”

The petition notes that Lawson is currently breastfeeding her one-year-old and now "must choose between risking arrest and imprisonment or foregoing the breast-feeding of  (her child) or the expression of breast milk in places open to public view because those actions may subject (her) to arrest and imprisonment.

The four-count lawsuit is seeking an injunction against the enforcement of the ordinance, a permanent injunction, damages, and attorney fees.

Missouri is the SHOW-ME state....

How come the protesters are mostly homely chicks?

Tell you what, if you're willing to reduce the crime of touching said nipples from sexual assault to simple assault like it would be for a man with his privileged nipples, maybe we can find a compromise here.

No? Then you're not asking for equality, but supremacy.

What a crock--women in Springfield have much more serious discrimination problems, and these protesters are making a mockery of that. Stupid, stupid, stupid.

This really isn't all about nipples.

The problems started when it became acceptable for women to show their ankles and elbows in public. Some things only a husband should see.

The confusion and militant feminism caused by allowing women to vote just made things even worse. Now some politicians pander to this vocal feminist minority who seek things like divorce and inheritance rights which the bible prophets reserved for men.

Now most people don't think women should wear burkas, but yoga pants and sleeveless tops? The Duggar family sets a chaste example if you decide to watch the television. The legislature could work on the problems of two piece bathing suits and lingerie stores which admit minors and mixed sex crowds.