An 18-year-old in government? Joplin has seen it before 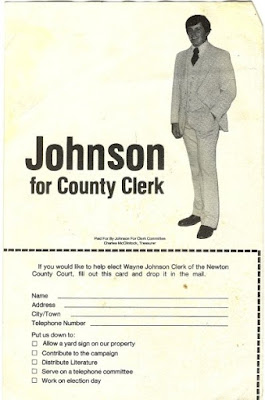 I am sure it will never be of any historical significance, but the first time my work was ever published in a newspaper, it was published under someone else's name.

Without digging back through boxes of old papers and finding a copy, I can safely say that it was a letter to the editor to the Neosho Daily News, published either in December 1973 or January 1974, when I was a senior at East Newton High School. It was heavily critical of the job the Newton County Court (now County Commission) was doing maintaining roads.

The letter was signed "Wayne Johnson" and it also announced that since he was only 18 years old and could not be legally placed on the ballot, he would run as a write-in candidate for Eastern District County Court judge.

Bill Ball, a Neosho Daily News reporter did some research and discovered that we were wrong. There was nothing in the statutes to prevent an 18-year-old from running for County Court judge, so on the first day of filing Wayne Johnson was the first one to sign as a Democratic candidate for the court.

It was not the first time Wayne had tried for elective office. When he was a senior at East Newton High School, we had mounted a one-day write-in campaign for the R-6 Board of Education, which netted him eight votes. That was enough for us to catch political fever.

When Wayne filed for county court, he was a freshman at Missouri Southern, majoring in political science. We had no expectation of winning, but we had a few things working to our advantage.

-After reading my pointed letter to the editor, the incumbent, Republican Bill O'Neal, responded, saying that he was fed up with the criticism and would not seek re-election. As his letter came just after an ice storm, he noted that we should be satisfied that the Lord had provided natural paving for the roads.

-We had youthful energy working for us. Wayne, the person who did a lot of the nuts-and-bolts planning for the campaign Gary Judd, Wayne's girlfriend (and later wife) Rhonda Trammell and I, as well as some of his classmates, went door-to-door over the entire eastern half of Newton County. We were always polite, dressed appropriately, and worked long hours.

-We received publicity because of Wayne's age. The Neosho Daily News, the Joplin Globe, the Chart at MSC (this was before the second S or the later U) all did profiles. Everyone knew who Wayne Johnson was.

Fairview Mayor Dick Harter was the Democratic primary opponent and Wayne defeated him by a wide margin. At that point, we figured we had gone as far as we were going to go, since even then few Democrats were ever elected in Newton County.

Fortunately, we had once again received a lucky break. The only one who had filed on the Republican ticket was a little-known candidate from the Joplin part of the county, whose name escapes me at the moment.

While his idea of campaigning was to go to the traditional fundraisers and picnics, we once again worked door-to-door.

One thing we were told several times was that Wayne was the first Newton County candidate Joplin voters could ever remember campaigning at their homes. I had the privilege of campaigning at the home of long time KODE weatherman Lee George, who was wearing a pair of Bermuda shorts and painting his house. Naturally, I asked for a forecast and he assured me there was zero chance of rain that night. I remembered that predication as we received nearly an inch and a half of rain that evening.

Wayne received another lift as college students began flocking to work for him in the fall to get extra credit for Annetta St. Clair's class at Missouri Southern.

When Election Day arrived, Wayne Johnson, an 18-year-old Democrat, became the youngest county official in Missouri. Two years later, married and needing a larger salary, Wayne ran for county clerk, but ran into a buzz saw when Bob Bridges, the popular former county collector, defeated him easily. I was not involved in that campaign (and it would not have made any difference if I had been).

As far as I know, that election 39 years ago was the end of Wayne Johnson's political career

Now more than four decades have passed since the last time a teenager was selected to serve in a political office. History repeats itself, as once again, a freshman at Missouri Southern, this time Rylee Hartwell, submits his name for consideration for the vacant Joplin City Council seat that once belonged to Mike Woolston.

For this appointment, Hartwell has to convince a majority of the remaining City Council members that he, and not the other 10 candidates, should be selected. The odds are against him at this point, but you never know what will happen in this city.

Hartwell's best chance to serve on City Council, will probably be next April. He already has years of experience working for both local and statewide campaigns, far more than either Wayne Johnson or I had in 1974.

One thing has not changed. The people of Joplin still like the idea of a candidate who is willing to work to get their vote.

That is true whether the candidate is eight or 80.
***
Today is the last day to buy e-books of my first book Small Town News or The Best of Sports Talk for 99 cents.

I remember those days. The door to door, and just being a part of something special at that time in our lives. Glad you bought that back for people to remember.

maybe he can replace Billy Long

Would give Miranda Lewis a chance to look more intelligent.

Fun times, who doesn't love a good underdog story. Maybe this kid will pull it off.

6:33, because she asks questions???? You're absolutely right, she should pretend she already knows everything and then make uniformed decisions of behalf of the citizens of Joplin, good call!