Ridder to R-8 Board: It's time to focus on behavior 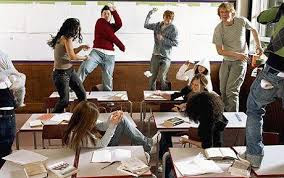 Interim Superintendent Norm Ridder told members of the Joplin R-8 Board of Education what district teachers have been saying for years.

"This is the first district where we have had to focus on behavior," Ridder said, referring to other districts in which he has worked.

"If we don't get our behavior in shape, we're going to have problems."

Ridder indicated he had come to this conclusion after meetings with parents and teachers. "The parents are frustrated," he said, and one source of that frustration is that discipline is applied differently at different schools within the district.

"We need to work on behavior immediately."

The major criticism of discipline in the R-8 School District over the past few years is that the statistics are meaningless because teachers are pressured into not writing office referrals and when they do write them, often the students, no matter what the behavior, are back in the classroom before the hour was over.

Or systems were put in place such as the one we had for eighth grade at East Middle School during the 2012-2013 school year, my last year there, when students had to have four teacher referrals, then a parent had to be called, then the student had to receive two more referrals before he or she could be sent to the office.

That eighth referral was often the only one that counted as far as the school's statistics were concerned.

Data is completely misleading as far as school discipline is concerned.

(Note: The photo is not from Joplin, but from England.)
Posted by Randy at 8:36 PM

Did Koch know something when he asked if they were counting "teacher referrals" to the office or the number reported by the office? Dossier answered that they were what the "office" reported. I wonder what the teacher number is!!

Why not include the behavior of the unqualified staff in the administration building? They should be held accountable for what they do during a work day - Maybe then they could eliminate several of the overpaid made up positions and save money too :-)

Whatever happened to that PBIS program? Besendorfer said that was going to improve behavior in the schools. Then she came up with another program the TLC's and that was the answer to everything.

So far Ridder seems to be good at saying stuff.....haven't seen a lot of doing stuff.

I found it interesting that he said we must not focus solely on student behaviors but adult behaviors as well. One must wonder what he has seen in three months. In his building alone we have witnessed some outrageous behaviors. As for the students, it will come as a great shock to them to be held to any kind of accountability. One way Huff got additional points toward accreditation, since he couldn't get them with academics, was to hold down referrals written by teachers. Students have gotten away with so much that they think they have a right to misbehave and slack off. That is fixed quickly, but Ridder is correct, it must be consistently done. I would wager there are several administrators around the district that won't know how to accomplish this, as they have been addicted to the Koolaid too long. The learning environment must be protected if any great gains in academics are going to happen.

Seems hard to believe a school the size of Cecil Floyd can have only two referrals this far into the year. Is the administrator there a miracle person? If so, she should be training her peers. I hope the teachers aren't being expected to suffer in order to keep the numbers down. That's the case around the rest of the district.

In the Globe this week there was an article about Bright Futures. They claimed because of Bright Futures that all kinds of miraculous changes had been seen around the district. One of their claims to fame was based on the Link Crew/Fusion group's success and how that had caused teacher referrals and failures for freshmen to go down. When I taught at JHS, we were told by the freshman administrator to not write referrals for anything except the most serious things. She would also send us emails and ask US what WE were going to do about our Fs, not the students. The teachers had all the pressure and the kids got away with anything they wanted. That's why we all left. So for Bright Futures to claim that they had caused that little miracle is a flat out lie. I also wondered how Bright Futures claimed they got that award last summer, since Melissa Winston just posted on this blog a few weeks ago that they don't have that data compiled yet. What data did they use to get their award, then? Just watching that last night made me glad I was retired. Now I just have to worry about how my tax dollars are spent, not what is going to happen with my job every day.

This is just another facet of the 'cover up' designed to 'increase graduation rates'. Actual learning has taken a backseat to graduating. It's all that matters now. Never mind that the kid with 63 infractions who can't be allowed to bother administration has completely eliminated a teachers ability to teach and his classmates ability to learn on AT LEAST that many occasions and probably more. This is all designed to keep butts in seats and money flowing into the schools. Zero else is the priority. If admin has to deal with the kids???? They'll also have to discipline the trouble makers. If the trouble makers aren't in the seats? They don't get paid for them to be there. Tell me why this shouldn't turn parents who actually want their kids to have more than a diploma onto private education or other school systems?!?! Oh .... and no one with kids in Joplin Schools needs focus groups to tell us the lay of this land. We live it.

Teachers are pressured to not fill out referrals on student behavior.

11:11 not all teachers / some can do whatever they choose, including writing referrals for students they personally don't like.
If you are a favorite / no problem no matter what you do.
We all know it's true