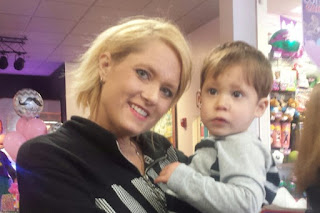 In this era of 24-hour news cycles, the horrible events of one day are nearly forgotten by the next, except for those who have to live with their aftermath.

In Joplin, one of those horrifying events took place June 10, 2015, when police say Stephen R. Thompson, 54, shot his wife and one of her friends, killing the friend. Jasper County online court records indicate Thompson was violating a full order of protection that had been issued only nine days earlier.

Thompson was charged with first degree murder, domestic assault, and two counts of armed criminal action. The next hearing in his case is scheduled for Monday, February 8, in Jasper County Circuit Court.

While Thompson's case is being handled in the judicial system, those who have been most affected by the crimes he is charged with committing continue to deal with the consequences, including his former wife.

Kristina Dines has shared her story on a GoFundMe site in an effort to deal with the expenses that have come as a result of the attack that nearly killed her.

On June 10th 2015, my husband who had an ex parte filed on him by me, entered my home carrying a 12 gauge shotgun and opened up my bedroom door raised the gun took aim, fired and shot my friend Carrissa (Girard).

We escaped out the window of my room. She ran to the privacy fence climbed over and dropped down and died.

I ran to the fence and was shot multiple times- the worst when I was at the top of the fence and getting ready to drop down. He shot me close range in the abdomen with bird shot. I was blown apart. I crab crawled to the neighbors back door holding my guts in and banged my head on the door. They pulled me in and I am alive still.

My 17-year-old witnessed all of this. He was unharmed physically. I was in a coma for two months and on ventilator. I coded several times, received dialysis and shouldn't be alive. I lost three toes, some intestines and some of my liver, too. I have a massive scar on my tummy.

I struggle everyday. I filed for disability and it is on hold ... I am unable to hold a job right now and need help bad. I have four children two/are with their father from a previous marriage. I lost housing and my ability to work. I have tried to get on my feet myself. I keep having setbacks and have to return to the hospital for recurring abscesses caused by the shrapnel in my body. I need help establishing my self again ...anything would help ...thank you in advance...Krissy

A goal of $5,000 has been set. Those interested in contributing can find more information at this link.
Posted by Randy at 7:43 AM

Thank you for sharing this! I know Kristina personally, and she has tried to work and is still trying, but the prolonged activity is difficult, because it moves the shrapnel in her body which then gets infected landing her in the hospital for weeks at a time. She really needs the help.

This young lady and her family need some help. Can't the good people of Joplin donate some money? They received enough a few years back. Look into your Christian hearts and remember, "heal the sick, tend the poor." Surely you can raise more than what is showing right now. This tragedy shouldn't include a life of constant financial struggle.

I'm so glad we were home and could help save a life. If you're able to help Krissy in any way, I know she'd be grateful.

Anyone deserves help- the circumstances leading up to this whole situation were at the very least not good
If you feel the calling to help her- pray for her also.......
hopefully there has been an awakening!