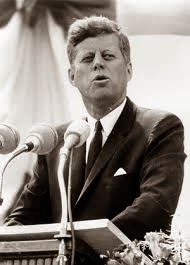 (The following post originally ran in the Turner Report in 2006, shortly after the death of Jud Dixon.)

The job didn't pay much, but the country was in the midst of a depression, and every cent counted. Even more importantly for teenager Jud Dixon, it was his entry into the magical world of news.

That road took Jud from the Globe street sales to reporting jobs with the Globe and the Springfield Daily News to a seven-decade career in journalism that ended last month with his death at age 85 at his Dallas home.

Jud Dixon spent the last five decades of his life in the Dallas area, and it was there on Nov. 22, 1963, that the Joplin High School and Joplin Junior College graduate had a brush with history.

Jud was in charge of the United Press International (UPI) bureau in Dallas when he received word that President Kennedy had been assassinated during a political trip to the city. Within seconds, with the cool demeanor that characterized his entire reporting career, he sat behind his manual typewriter pounding out the story that no reporter ever wants to write, but at times like that, when people absolutely have to know what is going on, that’s when reporters must be at the top of their game.

"He was completely stone-faced, pouring it out of that typewriter," Jack Fallon, who was UPI’s Southwest Division editor at the time, told the Dallas Morning News. "Just by his presence, he kept everyone else around him calm."

Within moments, it was Jud Dixon’s version of the death of President John F. Kennedy that went out over the UPI wire to radio stations and television stations across the United States.

Though Jud Dixon’s coverage of that watershed moment in American history was what led his obituary, he perhaps did his greatest service to journalism and to the public after his retirement from UPI two decades ago.

Jud spent the next 18 years of his life as editor of the newsletter for the Freedom of Information Foundation of Texas fighting for the public’s right to know.

When Jud retired for a second time, Freedom of Information director Tommy Thomason praised his years of service. "Jud’s a journalist’s journalist. His entire career has been committed to open government as the basis of solid reporting of the issues and events important to his readers."

Jud Dixon knew the importance of a free and unfettered press serving as the public’s representative. He knew that when the workings of government were open to the public that this country could survive anything from unpaved streets to official corruption to the death of a president.
Posted by Randy at 10:31 AM