Winners and losers from the 2016 election 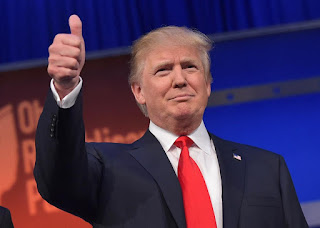 It was the longest presidential election in U. S. history and thank God it's over, but this election is going to be one that will be studied by historians centuries from now.

For the first time in 64 years, the voters selected someone who had never been in politics, and unlike Dwight D. Eisenhower, Donald Trump did not even have the benefit of a stellar military career to recommend him for the job.

All he had was name recognition, an unerring instinct for drawing attention to himself, and perfect timing.

Trump made his decision to run at a time when social media, to a large extent, was replacing traditional media as the way to reach millions of people.

In other words, a strong ground game, the primary compliment that everyone paid to the Hillary Clinton campaign, did not mean as much in a society where people are instantly connected through Twitter, Facebook, and SnapChat.

The loss of the heavily favored Clinton was reminiscent of Patrick O'Connor's great book about Boston politics, The Last Hurrah, in which an aging mayor runs one last campaign. The mayor is easily the best qualified for the job, but he has a well-deserved reputation for not always operating on the right side of the law.

In other words, when you don't adjust to the new reality, it will come back to bite you.

Some winners and losers from today's state and presidential elections:

Donald Trump- Obviously. He beat a large group of Republican candidates, nearly all of whom had better political pedigrees than his. He latched onto a populist wave and knew far better than many of those in his party who criticized him what the hot button issues were that meant something to his potential voters.

The Missouri Republican Party- I am not quite ready to write an obituary for Missouri Democrats, but tonight should give the party a reason to do some serious self-evaluation. Jason Kander was the bright light of the party and he was beaten by Roy Blunt (at this writing, Blunt is three percentage points ahead with only a few precincts left to be counted) Chris Koster, the strongest and best known of the statewide candidates, didn't come anywhere near another Trump-like non-politician vowing to swoop in and save us from career politicians, Eric Greitens.

David Humphreys- The Joplin businessman and members of his family contributed millions in an effort to implement so-called right to work legislation in Missouri. With the election of Greitens to go along with wide Republican majorities in both the House and the Senate, Missouri seems destined to finally become a right to work state.

Elizabeth Warren- If Trump's first term is a nightmare, this could be our first female president and she does not have the baggage Hillary Clinton has. Clinton's loss and an electorate that has clearly had its fill of Clintons open the door for a progressive. populist candidate and Bernie Sanders will be 78 years old in 2020.

Fox News- It seems surprising in a year that has seen Roger Ailes depart as Fox News CEO under a cloud of sexual harassment charges and the most fawning interviews you have ever seen with Donald Trump from both the morning show Fox and Friends and the insufferable Sean Hannity., but Fox will come out a winner. Megyn Kelly was the early media star of the campaign because she was the first reporter to really challenge Trump, with a tough, but fair (and balanced) question and continued to build her brand name throughout the election season. Chris Wallace also offered the best performance of any of the moderators during the debates. What really puts Fox News in the winners category, however, is the election of Trump. If anyone thinks Sean Hannity is not going to get some kind of job in the Trump Administration, you haven't been watching him. And if Hannity leaves Fox News, that moves FNC into the winners' circle.

Mark Halperin- Halperin, the Bloomberg News political editor, the co-author of the great political book Game Change, about the 2008 presidential election, was one of the few non-Fox News pundits who did not declare a Hillary Clinton victory weeks ago. While Halperin expected Clinton to win, he outlined paths that Trump could take to victory, including the Rust Belt approach that proved successful. (And if you have never read Game Change, and you are interested in politics, find a copy. He and Jon Heilmann explain why Hillary Clinton lost to Barack Obama and much of it reveals the same flaws that led to her loss to Donald Trump. The book also reveals a human, sympathetic look at Sarah Palin and if you did not already despise him, it proves just what a horrible human being John Edwards is.)

KellyAnne Conway- The Trump campaign manager's stock was sky high even if he lost, Now she can write her own ticket.

Deplorables-  They have moved into the mainstream.

The Democratic Party- The WikiLeaks documents showed how Debbie Wasserman Schultz and the party big wigs stacked the deck against Bernie Sanders in this, the one year in which a socialist could have been elected president of the United States. Sanders was riding the same populist wave as Trump, but with far more humanity and far less baggage. The Democrats were so intent on anointing Hillary Clinton that they ended up nominating the one candidate who could lose to Donald Trump.

Hillary Clinton- "I was wrong. Here are my e-mails." That would have gone a long way if she had done that many months ago. It still might not have been enough.

Claire McCaskill- McCaskill seemed to be a sure bet to be appointed to a position in a Clinton Administration. In two years, she faces re-election and she is not going to be able to handpick a Todd Akin this time around.

Public Education- The election of Eric Greitens as governor poses a true threat to Missouri public education. As revealed in the October 8 Turner Report, Greitens accepted more than $700,000 from opponents of public education and proponents of charter schools.

Unions- All of the millions the unions spent could not get Chris Koster elected and that means right to work is a virtual lock.

Political Dynasties- The Clintons and the Carnahans both took a hit today.

The Media- I was not pulling for Donald Trump, but I was irritated to death hearing reporters continue to ask his surrogates questions about whether he was going to concede if he loses. It is that kind of useless question thar irritates people so much about the media. The media also never seemed to understand that Donald Trump could win the election and it colored a lot of the coverage. The election of Trump spells the beginning of a war between the president and the media. Actually, that should just mean business as usual.
Posted by Randy at 12:08 AM

I am definitively a Deplorable; irredeemable in fact!

Our Country, and the Supreme Court are safe.

There is a fire storm coming Harvey. Turn your money into hard assets and find yourself a hidey hole.

The Missouri Republican Party- I am not quite ready to write an obituary for Missouri Democrats, but tonight should give the party a reason to do some serious self-evaluation.

When your opponent runs the tables statewide, something I myself didn't expect, yeah. It's indeed too early to even declare the state having moved from Purple to Red status, but they've obviously got big problems outside their urban centers of strength, at least to the extent they can't disconnect themselves from their much further to the left national party. In fact, I'll bet a lot of their success will depend on where the national party goes from here. And if someone like Elizabeth Warren is their 2020 presidential candidate, I wouldn't expect them to do well.

This was not a season to run on a platform of gun control including letting the government use secret lists to decide who gets to own guns. The NRA went all in on supporting Blunt to an extent I've never seen or heard of at the state level, and this point alone cost Kander my vote (being one of the deplorables who wants to get send GOPe members like Roy back home to spend more time with their families).

Chris Koster, the strongest and best known of the statewide candidates, didn't come anywhere near another Trump-like non-politician vowing to swoop in and save us from career politicians, Eric Greitens.

And lost at twice the margin of Kander....

Elizabeth Warren- If Trump's first term is a nightmare, this could be our first female president and she does not have the baggage Hillary Clinton has.

That's what I call a "weak statement"; at this point, is there any American politician with as much baggage as Hillary including her nuclear family? And don't forget her vulnerability in claiming to be part American-Indian to climb the academic greased pole, when in fact her ancestor played a nasty role in the Trail of Tears?

But I will grant she has a lot better chance, and shows every sign of being healthy enough to seriously run in 2020, which was one of Hillary's big problems this year.

You really think Fox becoming another "me-too" liberal/progressive channel is going to be good for them? Or that another channel or three won't fill the resulting vacuum? As Hillary showed, hating half the country has consequences.

Donald's experiences in his ventures many bankruptcy proceedings TRUMP anything else.

11:21 AM: Given that the nation is already bankrupt, that's a good qualification for the Presidency. He knows deep in his gut how things can turn sour and leave you scrambling to salvage what you can.

If what I've read about recent explosions in all sectors of Medicare besides hospital reimbursements is correct (and given the aging of the Baby Boomers, it makes sense on its face (although a 32% increase in administrative expenses??? Nice work if you can get it)), this will become unavoidable before his first term is finished.

At least with Trump, we are going to get a "Purge" night once a year.

Actually the Democrats won this election. First of all, they are finally rid of the Clintons and will be able to actually move forward without their political baggage. Further, Democrats won because the Republicans now control every branch of government and will not be able to blame anyone but themselves for the mess ups which are certainly on the horizon actually arrive in Washington. The American taxpayers won because there will no reason to continue the Congressional investigations which have consumed the Republicans for the last half decade. Then the Democrats won because they have a clear path for change after four years of the Conservative Agenda. Best of all, the Democrats can sit back and watch it all without any feelings of guilt because the people got exactly what they voted for. It will be one hell of a ride so you might as well enjoy it.

What happens when Trump's wife refuses to move into the White House. I understand she actually told him it was a "dump" after her tour and is refusing to move in unless massive and major renovations are made.