Gingrich: Billy Long has shown courage; Blunt is a great human being 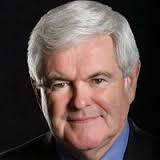 During a speech Tuesday night at College of the Ozarks in Point Lookout, former Speaker of the House Newt Gingrich praised Seventh District Congressman Billy Long and Sen. Roy Blunt:

Among those in attendance Tuesday was U.S. Rep. Billy Long, whom Gingrich praised for showing "enormous courage" in Congress. Gingrich also had good things to say about the Missouri Republican in the Senate, calling U.S. Sen. Roy Blunt "a great, great human being."

Courage: the ability to consume a Big Mac in one bite

You must be living right when Newt oozes into your corner!

Just ask Ann Manning, a married woman back home in Georgia who admits to an affair with Gingrich.

“We had oral sex. He prefers that modus operandi because then he can say, ‘I never slept with her,'” says Manning.

What the meaning of sex is?
I guess Newt would know.

Sex scandals, blow jobs and the ’stench of hypocrisy’

“We would have won in 1974 if we could have kept him out of the office, screwing her (a young volunteer on Gingrich’s staff) on the desk,” Crews says.

Kip Carter, his former campaign treasurer, remembers a football game in Gingrich’s district. She was walking Gingrich’s two daughters back from the game and cut across the parking lot when she spied the Congressman’s car.

“As I got to the car, I saw Newt in the passenger seat and one of the guys’ wives with her head in his lap going up and down,” Carter says. “Newt kind of turned and gave me this little-boy smile. Fortunately, Jackie Sue and Kathy were a lot younger and shorter then.”

They were both married but not to each other?
REPUBLICAN FAMILY VALUES!
He repented and then went forth to sin no more?

I worked for Gingrich in 1992, raising money for GOPAC, his political action committee. During fundraisers at homes in the Washington area, he would whisper something in the ear of a sweet young thing and they would disappear for 30-45 minutes.

“Newt’s getting a blow job,” a female GOPAC staffer told me. “He likes blow jobs.”

At the Republican National Convention in Houston in 1992, a GOPAC volunteer was assigned to escort young women to a hotel room for quickie oral sex and stand guard outside to make sure the Congressman was not disturbed. I found one of those women crying in the hotel bar afterwards.

“He’s a pig,” she said. “He made me get down on my knees and fellate him and then turned his back to me and told me to leave as soon as he came.”

We need these great guys in that Washington cess pool helping Trump drain that rotten swamp!

Thank you Newt for coming

Harvey, there is a reason we call it the "invisible empire". You keep shooting off your mouth and we will throw you out of the Klan.