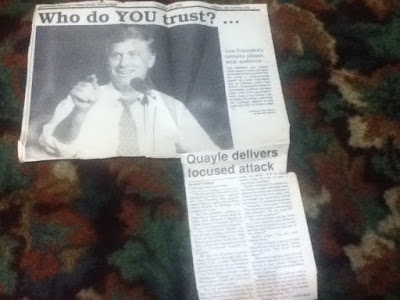 Tonight's rally featuring Sen. Ted Cruz at Missouri Southern State University is the closest the area has come to having a political celebrity and it brought back memories of another such visit, this one by the vice president of the United States during the waning days of the 1992 presidential campaign.

As I have said many times over the years, I enjoyed the entire 22 years I worked as a newspaper reporter and editor, but probably my favorite period began a few months after I started working at the Carthage Press in 1990 and lasted until I became managing editor in November 1993.

After my first few months at the Press, I began working a new schedule where I came into the office early in the afternoon, checked with Managing Editor Neil Campbell to see if I had any assignments and then I went on news scavenger hunts, sort of a one man evening shift.

Neil was always good about letting me find my own stories. I had certain things I had to cover, usually in Carthage, but other than that, my goal was to come up with at least a couple of stories every night.

This also gave me opportunities to work on various investigative pieces, help with sports coverage, and if I had an idea for a story, I went for it..

One such occasion was the beginning of Operation Desert Storm, I was returning to Carthage from a Sarcoxie City Council meeting when I heard that it had started. I bypassed Carthage and went straight to the 6-10 convenience store in Jasper where Robin Roughton was working. I knew her husband was serving overseas and was involved in Desert Shield. I interviewed her, got a photo and had a feature to go along with the AP coverage the next day.

Another time, I was finishing up with my work on the next day's paper at about 2 a.m.. I had to get gas before I went home and instead of my usual stop, I went a couple of blocks out of my way to a convenience store that had been hit by an armed robber the night before.

As I was paying, I started a conversation with the clerk and discovered she was the one who was on duty during the robbery. I asked her if she would mind giving an interview and the next day, there was another page one feature and photo. (The convenience store owner was not thrilled about it, but that's another story.)

Every day I went to work not knowing what was going to happen next. It was great and I loved it.

One of the most memorable days was October 26, 1992, when Vice President Dan Quayle came to Carthage Junior High School for a rally. It wasn't often that we had someone of that magnitude coming to our town so Neil assigned everyone to cover it. Marvin VanGilder was there, newly hired Ron Graber, and our sports editor (now Jasper County Sheriff) Randee Kaiser.

Ron and Randee were top-flight photographers, so both of them were needed.

And that evening, in the course of four hours, I covered four events in three towns.

The first was the Carthage High School volleyball team's district opener at Joplin at 5 p.m., followed by the Quayle rally at 5:30 p.m. in Carthage, the Webb City Council meeting at 6:30, and then back to Joplin for the volleyball team's second game at district, which would be played at 8 p.m. if it won the first match.

I covered all four events.

During the first volleyball match, parents told me they were surprised I wasn't at the Quayle rally. I would have been, I told them, but I wasn't going to miss the volleyball team playing at district to see Dan Quayle.

I used the same line at the Webb City Council meeting. When it ended, I returned to Joplin and covered Carthage's second match of the district tournament, which unfortunately turned out to be its last.

When I returned to Carthage, instead of heading to the newsroom to write my stories, I went into the conference room, where I replayed the video in the VCR and covered Dan Quayle's speech, thanks to KSN's decision, which we had been told about earlier, to broadcast the entire event live.

When I went into the newsroom, there were notes from the other reporters, providing me with information in case something had gone wrong with the recording.

In retrospect, if we had known Carthage was going to win its first volleyball match, I probably would have remained in Carthage, but the Press offered strong coverage of women's sports and we wanted to have someone there for the team's last match and Randee had a game to cover after the Quayle rally.

I don't have the energy now to do anything like what I was doing in those days, but I certainly had a great time doing it.

This is what I wrote about the Dan Quayle rally and you will notice that some of the things that he said 24 years ago we are still talking about today.

The vice president, making his first stop in Jasper County since October 1988, delivered a sharply focused attack on Gov. Bill Clinton and the Democratic Congress.

The shirtsleeved Quayle reminded the audience of more than 1,000 at the Carthage Junior High School gymnasium of the last time that a Democratic president served with a Democratic majority in Congress.

He cited the 21 percent interest rates, the grain embargo after the Soviet Union invaded Afghanistan and "long lines at the gas stations" during the Carter Administration.

"A Democratic president and a Democratic Congress," Quayle said. "That was a mistake. We will not repeat that mistake again."

The vice president noted that it was the Bush Administration that was in office when the Cold War ended. "We can change America like we changed the world," he said.

"We won the Cold War. Just because the Berlin Wall is down doesn't mean it's safe to have a Democratic president."

Quayle continued the attacks he has made at earlier campaign stops against the media and continued to hammer home the trust issue that he brought up continually during the recent vice presidential debate.

"Character is an issue," he said. "The American people want to trust their president. Do you trust Bill Clinton to be president?"

The vice president put the issue on a more personal level. "If something were to happen to you, would you want Bill Clinton to take care of your family?"

At that moment, a group of local Republicans held up giant letters spelling out, "We trust Bush/Quayle "

More than anything else, the vice president lashed out at what he referred to four times during his speech as "the liberal, greedy Democratic Congress."

Pretty sure Dubya was here back when it was still MSSC. And I am pretty sure his dad spoke at MSSC in the early '90s.

You are correct, but I hope that you are not writing that just to prove that I was wrong. Please tell me another time a candidate came to this area that late in the election cycle. I don't remember it happening. This area is considered to be so rock-ribbed Republican that national Democratic candidates avoid it like the plague and national Republican candidates figure they already have the vote so they don't bother to come here.

Things were certainly different then.

Cruz was a Hit with his audience, and it looks like a clean Republican sweep!!

A little embarrassing were the "Classless" hecklers outside the hall making fools out of themselves!
I hope noons in my party ever acts that way at their events.

Of course the bigoted predjuduced Joplin Globe thought it was "cute"!!

Obama came to Springfield in 2008.

You say po-ta-toe, I say po-tah-toe...let's call the whole thing off