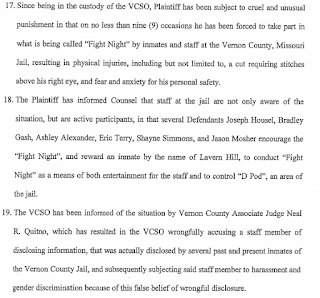 A lawsuit moved to federal court today accuses Vernon County deputies of sanctioning prisoner fight nights for their own amusement.

The action, which was originally filed in Vernon County Circuit Court, was filed by prisoner Alexander Trexel and alleges the deputies had a prisoner named Lavern Hill organize the fights both as a way of entertainment and as a way to control D Pod.

Trexel said he was forced to fight nine times, suffered numerous injuries and feared for his safety.

The first count, filed against the sheriff, deputies, and jailers, alleges assault and asks for an amount in excess of $100,000 in damages and $25 million in punitive damages.

The second count alleges the same defendants violated Trexel's constitutional rights under the 4th, 5th, 8th, and 14th Amendments and asks for an amount in excess of $100,000 in actual damages and $25 million in punitive damages.

The third count alleges violations of the same constitutional rights against the commissioners and Vernon County Sheriff's Office for not exercising any control over the county employees involved in the fight nights. On that count, Trexel is asking for $1 million in damages and $100 million in punitive damages.

This sort of thing occurs all the time in jails and prisons. This is how they maintain "order" with uppity prisoners is have trustee-inmates beat some of the weaker ones up. But it is usually done "unofficially". Sounds like the Vernon County bunch got away with it too long and they got caught.