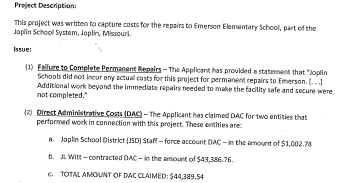 What they got was less than a penny when FEMA turned down the heavy thinking that the officials put into a restoration of Emerson Elementary that never took place following the Joplin Tornado.

Documents obtained by the Turner Report through an Open Meetings Law request show that on April 12, in a letter to R-8 CFO Paul Barr, FEMA rejected the request for $44,389.54 noting "applicant has provided a statement that 'Joplin Schools did not incur any actual costs for this project for permanent repairs to Emerson. Additional repairs needed to make the facility safe and secure were not completed."

Still, even when the work is not done, costs are incurred for all of the work that goes into deciding what to do.

The FEMA letter indicates the money was all designed to go to administrative costs, with $43,786.54 going to J. L. Witt and Associates, the consulting firm hired to help the district deal with its recovery. The other $1,002.78 was for the district.

Among the other revelations in the documents, most of which have been noted in previous Turner Report posts, Joplin R-8:

-Missed one FEMA deadline after another, some of them by as much as three years.

-Asked for more federal taxpayers' money, but provided almost no documentation to support those requests.

-Asked for money for damages that FEMA photos indicate were either overstated and/or non-existent.

-Agreed to a limit of $155 an hour for some of those working on the project, but submitted requests far above that amount, up to as much as $430 an hour.

-Violated FEMA regulations from the beginning by hiring a high-powered and high-dollar firm (Witt and Associates) to guide the district through the recovery process without putting the job up for bids.

-Possibly violated the Sunshine Law during a December 2016 Board of Education meeting when the same firm was hired to help the district as it tried to deal with FEMA paperwork. Again, the firm was hired without taking bids.

-Told FEMA the district's entire focus was on "rebuilding and reopening its educational facilities" and then they would focus on how much it cost.

FEMA Joplin High School documents: Where the hell did the money go?

For reasons such as these, and many other wrongs perpetrated by the Joplin R-8 school district under Huff's regime, I will NOT vote yes on any bond issues asking us taxpayers for more money. It will be many years before I will ever consider it, and then only if the district gets their act together. I was a teacher in the district for over 35 years. They are going to have to earn my trust back.

We agree and are looking to move away from having to pay taxes to the district. Enough is enough.