Joplin City Clerk retiring after 20 years at the job 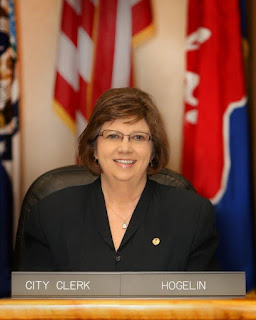 On the day she is retiring as Joplin City Clerk, Tuesday, January 2, the Joplin City Council will offer a resolution honoring Barbara Hogelin for her 24 years of service to the city.

The text of the resolution honoring Hogelin is printed below:

A RESOLUTION recognizing Barbara L. Hogelin upon her retirement of active service as City Clerk for the City of Joplin.

WHEREAS, on Tuesday January 2, 2018, Barbara L. Hogelin retired as City Clerk for the City of Joplin, Missouri after 24 years of dedicated service; and

WHEREAS, Barbara was appointed City Clerk in 1997 by Mayor Ron Richard; and

WHEREAS, Barbara prepared hundreds of agendas and attended over 550 regular council meetings, numerous pre-meetings, informal meetings, special meetings and work sessions; and managed the archiving of over 5500 ordinances and 1150 resolutions during her career; and

WHEREAS, Barbara’s vision, passion and love of her city has been instrumental in restoring the Newman building into a shining example of historic preservation that is much more than a place for city government business; it has become a museum with priceless and meaningful artwork, artifacts and displays; and

WHEREAS, Barbara Hogelin was an enthusiastic leader at work and in the community, serving in many organizations and accumulating an impressive list of accomplishments, recognitions and awards including the prestigious Missouri City Clerks and Finance Officers Association Outstanding City Clerk for 2017, and being named a finalist for Joplin’s Annie Baxter Award.

BE IT RESOLVED BY THE COUNCIL OF THE CITY OF JOPLIN, MISSOURI, as follows:

Section 1. The City of Joplin does hereby recognize and extend appreciation to Barbara L. Hogelin for her dedicated service of Twenty-Four years.

Section 2. That the people of Joplin, Missouri do hereby extend best wishes to Barbara for many enjoyable and successful years.

Section 3. That this Resolution shall be in full force and effect from and after the date of its passage and approval.