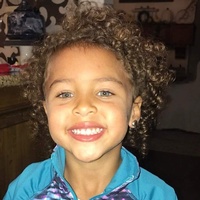 Jasper County Juvenile office documents dated November 30 reveal that three-year-old murder victim Jayda Kyle was likely already brain dead when she arrived at Children's Mercy Hospital, but she was not stable enough for doctors to do the test. They were able to determine that she appeared to have no brain activity:

"Initially, the ED doctor stated he believed the child had suffered an aneurysm. Jayda was then seen by a neurosurgeon with the SCAN team who reported the amount of brain bleed and retinal damage is non-natural causes."

The tests showed that Jayda had a severely torn retina.

"Due to this, she is reportedly blind."

Medical personnel were in and out of Jayda's room Nov. 29 as she kept coding, according to the report. She was officially pronounced dead December 1.

Family members indicated it was common for Jayda to have headaches, the report said. The child's mother, Devyn Kyle, said "Jayda has been having fevers frequently the last month and has been bruising easily. Devyn said the last two weeks have been worse with Jayda reporting pain. Friday night, Jayda was crying an hour and a half prior to bed time due to pain. She had sleep apnea issues at 10 months old and had her tonsils removed and was 'a new kid' after that."

The story Devyn Kyle and her live-in boyfriend at 405 Meadow Lake Drive, Carl Junction, Jalen Vaden, told investigators at the time of the initial investigation was considerably different than the one that eventually led to Vaden's arrest on charges of second degree murder and felony child abuse.

From the Juvenile Office documents:

"Devyn reported Jalen put Jayda to be around 8-8:15 p.m. and Devyn went in after that to tell her goodnight, but she was covered and (she) really didn't see her body. They did some laundry then Jalen went to Jayda's room around 9 p.m. to put laundry away and he came out cradling (Jayda) in his arms. Devyn reported there was blood in her mouth and she was unresponsive. Jalen told Devyn (Jayda) was face down on the floor. Her limbs were stiff, but her body was limp. Devyn stated Jalen then called 911.

The story was subtly different as told by Vaden to the investigators, according to the documents.

"He reports around 8 p.m. (the older brother) and Jayda put themselves to bed. Jalen states he was doing laundry in the living room at this time. He went to check on Jayda because when he is up he checks on all the kids and she was on the floor. He rolled her over and saw blood and picked her up in the cradling position. He then stated when he walked in, she was gulping for air. He called 911 and they walked him through mouth to mouth and chest compressions. They instructed him to wipe the blood out of her mouth, but he couldn't because her mouth was clenched shut. EMS was there in three minutes. He recalled her slipping in the bathtub earlier that evening, but that he caught her and she was not hurt.

"He then talked about an argument between him and Devyn that day/evening. It is unclear what that argument was about at this time."

A short time later, Vaden said, Jayda left the room still not wearing the pajamas. He said he threw her on the bed, then grabbed her by the leg and threw her face first on the floor.

When he returned, Vaden told the officers, he found Jayda "bleeding and unresponsive."

It's been very fishy from the beginning i just hope they get justice for this poor baby she sure didnt deserve that at all Justice For Jayda!!!

Always remember to lawyer up first?!

Hello! If you were still interested in Justice-4-Jayda shirts here's the link to order! https://stores.inksoft.com/justice4jayda/shop/home

This is an innocent little girl. I understand wanting justice but these gruesome details did not need to be included for all to see. Child abuse, yes, retina torn, bleeding brain, no. Have some compassion for BOTH families who are grieving.

This is just another day in the Jasper County good old boy network. This is a corrupt system and I have first hand knowledge of such. Judd McPherson is a fraud! I've been on the opposing side of Judd. He'll do whatever it takes as long as it fits his motives. This is just another example of such. However, this time, he's been exposed. All his previous cases should be reexamined and he should lose his ability to practice the law. The FBI needs to get involved to provide an unbiased investigation and ensure this case gets properly handled. Who knows how far this good old boy network goes? This little girl needs justice!


This WAS an innocent little girl.

The innocent little girl will never read any of this.


Who would call an attorney before 911?

Do you have proof that 911 was not called first? I have not seen any factual evidence that would indicate who was called first.
This is a child death investigation, not a circus!
Based on the evidence I have seen I do believe there is definitely more to the case than is reported.
There are inconsistencies in the stories that DV and JV are providing. If she was home when her beautiful daughter was killed and she ignored her cries for help or had a hand in the abuse that led to her death then she is just as guilty as JV. He should not be the only one facing consequences.
I also believe that as parents we have the instinct to protect our children whether they are three years old or 26 years old. That being said, it is one thing to use one's power to erase a traffic violation. However, it's a whole different ballgame to abuse one's power to hinder a child death investigation! I believe the DFS papers prove that CJPD did not do their job starting the investigation promptly due to friendship ties that happen in small towns. The two adults in charge of the care of the child were allowed back into the crime scene immediately following the incident. Would this have happened if the mother of the child didn't have an influential father?
All of this aside, it is obvious both sets of grandparents love their grandson whom is mourning the death of his sister and missing his mother, despite what he may have witnessed that night. I pray that these families can come together in the boy's best interest without hindering the investigation.
It is said that the truth shall set you free. I believe that peace only comes when the truth is told. I pray that the truth comes to light and that justice is served. I believe that the mother of Jayda will only be able to find peace is if she knows her conscience is clean.

I believe God's divine intervention will prevail. Be still and allow God to direct this investigation. Have faith!

It actually was called first by Jalen actually! But you all know the “FACTS” I forgot! ��