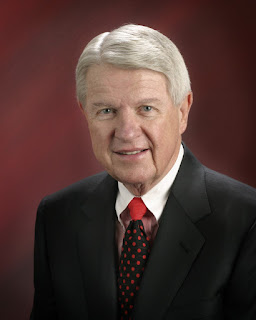 One was an X-rated performance by a man at 4th and Main that resulted in his arrest on sexual misconduct charges. The Joplin Police Department incident report was the number two post on Inside Joplin this week. Since the report did not name the man, even more people went to the list of police arrests to find out who the 53-year-old Joplin man was.

The other effort to bring entertainment downtown was a bit more highbrow as Leggett & Platt Chairman Emeritus Harry Cornell (pictured) donated $5 million for the Joplin Arts and Entertainment Center, a post that placed fourth this week on the Turner Report.

For the third straight week, a columnist broke into the top 10 and it was the third different one as Cheyla Navarre hit number 10 with her post.

The murder of three-year-old Jayda Kyle dominated Turner Report posts for the second straight week with the preview story of her accused killer's arraignment and then the post on the arraignment ranking at numbers one and three respectively.

The most unusual post on the list was the 2014 post on the Joplin R-8 Board of Education's decision to pay $100,000 to replace the seats in the new Joplin High School gymnasium because they were the wrong color. I posted a Facebook link on the third anniversary of that decision and apparently, plenty of people wanted to relive the C. J. Huff glory days.

5. FBI searching for information on Dr. Rosenschein's involvement with minors during years he practiced in Joplin

8. Stacey Garvilla: Thanks for an amazing five-and-a-half years

10. Cheyla Burkett: What kind of Christmas gift should you get for your mail carrier?

2. Joplin man arrested for sexual misconduct after taking things into his own hands

4. Joplin Police: Is this bag of meth yours?

9. Driver arrested after crash for obstruction charge, tells JPD "Big Man" was really the one driving the car